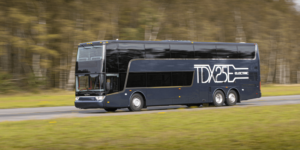 Long-distance buses with battery-electric drives are still a rare species but the Belgian commercial vehicle manufacturer Van Hool pushed zero-emission evolution forward with a double-decker coach with purely electric drive. The TDX25E is supposed to have a range of up to 500 kilometres and has been created for the North American market.

Van Hool has built up its business on the other side of the Atlantic over what has now become decades. According to the company, which is based in Koningshooikt, Belgium, 11,000 of its coaches and buses are currently on the road in the USA and Canada in cooperation with its sales partner ABC Bus Companies. According to company head Filip Van Hool, it is thanks to the demand from local customers that the second battery-electric long-distance bus model is now about to make its debut in North America in addition to the existing combustion engine portfolio. The single-deck Van Hool CX45E that was launched last year, will now be followed by the double-deck TDX25E. In response to an enquiry from electrive, the Belgian company said that both models hold an identical electric drive.

Both the solo and the double-decker coaches are equipped with a Siemens motor (Siemens ELFA II), which has a continuous output of 310 kW, a peak output of 360 kW and a torque of 4,242 Nm. The manufacturer gives the top speed as 114 km/h (71 mph). The engine is powered by a 676-kWh battery pack from Proterra (E2), which is a lithium titanate pack (LTO) that is supposed to ensure a range of up to 500 kilometres – “depending on the type of terrain and weather conditions”, says Van Hool headquarters.

The CX45E’s DC charging power is 125 kW, and charging time is said to be about five hours (from 5 to 95 per cent SoC). The analogue values for the TDX25E are not yet available. However, these are likely to be similar. What is clear is that the plug type is designed for the North American market with CCS Type 1.

Of course, the double-decker travel coach also has differences in its dimensions and the number of seats. The CX45E that was first seen at Busworld Europe in October 2019, comes with dimensions of 13,895 mm length, 3,505 mm height, 2,590 mm width and a wheelbase of 7,735 mm with 56 seats. Its double-decker counterpart is almost half a metre taller (3,990 mm) and almost 40 centimetres shorter (13,520 mm) with the same width. Van Hool gives the number of seats as 69 – including 18 seats in the lower level and 51 seats in the upper level. Compared to the diesel-powered sister model TDX25, which has identical external dimensions, this is twelve seats less.

Van Hool envisions positioning the TDX25E in North America primarily as a vehicle for commuting to work and regular passenger transport. “American customers reacted very enthusiastically to the driving experiences with our first battery-electric coach, the CX45E,” says Filip Van Hool. He says that this motivated his company to quickly get to work developing a battery-electric double-decker that has a higher passenger capacity. “Our experience with electrical drive systems in the past, and recently with the CX45E, really helped us with the rapid development and comprehensive testing of the newest Van Hool double-deck, the TDX25E,” he elaborates.

So far, 22 units of the CX45E have been delivered to the USA. According to a statement from sales partner ABC Bus Companies in June, most of these have been delivered in and around the San Francisco Bay Area. This coincides with Van Hool’s statement that the company’s own buses are in use for a number of large companies in Silicon Valley some of which offer shuttle services for their own employees. This makes it clearer what the company understands by the aforementioned shuttle service as the intended use of its electric buses. The above-mentioned “demand from some local customers” for the electrification of the buses is therefore most likely also a request from Silicon Valley corporations.

According to a number of media reports, van Hool buses currently make up a large part of the fleet at technology companies such as Google and Facebook. The private bus market in Silicon Valley is said to have significant business potential. Before the Corona pandemic, there were more than 1,000 private buses in the San Francisco Bay Area to transport employees between their homes and workplaces, in contrast to 3,000 public transport buses, according to Green Biz.

The battery-electric buses from Van Hool are driven from the Belgian factory in Koningshooikt to Zeebrugge and shipped from there to the USA. In the current announcement of the TDX25E, Van Hool has not yet said whether the all-electric long-distance bus duo could also be offered in Europe in the foreseeable future. However, on the occasion of the first shipment of CX45E units in December 2020, CEO Filip Van Hool said that there was growing interest in a European version of the CX45E – even if this has not been as pronounced as in North America. “With the experience we have gained in developing the CX45E, we strongly believe that we will be able to quickly deliver a solution for customers looking for such a product when interest in Europe becomes stronger.”

In terms of demand for double-decker buses, however, the Belgian company attests to the North American market leading the way. “Nowhere is the demand as great as in the USA,” the manufacturer says. The first double-decker rolled off the assembly line at Van Hool in 1982, and since 2007 they have also been exported to the USA. Worldwide, more than 3,500 units have been sold in 19 different countries, according to the manufacturer. In future, the TDX25E will be offered as an emission-free alternative.

Van Hool wants to take a broad approach to the electrification of its portfolio. The Belgian company has really covered all bases and has hybrid and fully electric commercial vehicles in their programme as well as vehicles with overhead (catenary) lines and hydrogen vehicles. Van Hool says it has so far produced around 1,200 electric vehicles of these different drive types. Just this summer, the company concluded a battery framework agreement with the German battery system manufacturer Akasol. The manufacturer obtains the fuel cell modules for installation in its hydrogen vehicles from Ballard Power Systems.

Next year, Van Hool will celebrate its 75th anniversary. The manufacturer employs roughly 3,500 people worldwide, most of whom work at the production sites in Koningshooikt in Belgium and in Skopje in northern Macedonia. Most of the company’s commercial vehicle production is destined for Europe and North America.