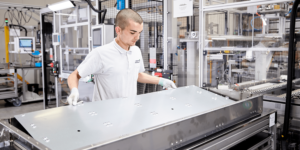 The battery system manufacturer Akasol has signed a framework agreement with a major bus and commercial vehicle manufacturer from Belgium with a total volume in the mid-double-digit million euro range.

According to the Darmstadt-based company, Akasol will “supply the second and third generation of its high-energy battery systems for a new all-electric city bus of the customer” from 2021 to 2026. Initially, this will be the second generation of the high-performance battery systems of the type AKASystem 15 OEM 50 PRC. Their series production at Akasol’s Langen site is scheduled to start in the fourth quarter of 2021. “By 2022 at the latest”, the customer wants to equip its electric city buses with the new ultra-high-energy battery systems from the Darmstadt-based manufacturer.

“We are proud that one of the largest European bus manufacturers has now also chosen AKASOL as a strategic partner for the consistent electrification of its portfolio,” says Akasol CEO Sven Schulz. With the new framework agreement, the company is not only expanding its customer base with a strategically important partner and well-known commercial vehicle manufacturer from Europe, but is also further expanding its market share in the field of electric buses.

As usual, the name of the customer is not disclosed. According to Akasol, the new customer “is one of Europe’s largest commercial vehicle manufacturers, specializes primarily in coaches, city buses and trolleybuses and manufactures its vehicles mainly for the European and North American markets”. This suggests that it is Van Hool, with sites in Koningshooikt and North Macedonia.

Akasol CEO Schulz emphasises that they have “established ourselves excellently in the market as a strategically important supplier of what is probably the most important e-mobility component for buses”. But the framework agreement with the new customer is also a success in another respect: the new customer also wants to equip its fuel cell buses with Akasol batteries in the future. “In addition, further cross-selling potential could arise in the long term if the Belgian manufacturer also electrifies other segments of its portfolio – such as trailers or tank containers,” the company added.

Akasol had moved into its new headquarters in Darmstadt in October 2020. With the commissioning of their ‘Gigafactory 1’ at the new Darmstadt site, the company will have 2.5 GWh of capacity available this year, which can be expanded to up to 5 GWh depending on customer requirements. At the end of 2021, the ‘Gigafactory 2’ in the USA is also scheduled to go into operation. In addition, Akasol still has the aforementioned production facility in Langen. At the beginning of June, the US supplier BorgWarner completed the takeover of Akasol announced in February, however, the management team around Schulz will continue to run the company.

Li-Cycle to recycle batteries for Helbiz