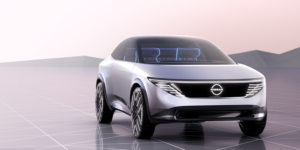 Nissan is accelerating its electrification plans with an investment of two trillion yen over the next five years as part of its now unveiled Ambition 2030 strategic plan. The Japanese carmaker plans 23 new electrified models by 2030, including 15 pure electric models.

The investment sum corresponds to the equivalent of 15.6 billion euros. The majority of the announced EV models are to be launched already by the end of 2026: 20 of the 23 models with pure battery-electric or e-power hybrid drive are to go on sale in the next five years, according to Nissan. With these model series, an electrification mix of 50 per cent is to be achieved by the 2030 financial year – Nissan does not give any details on the sales targets for BEVs.

Instead, there are more concrete interim targets for the individual markets: the sales share of electrified vehicles – again, not purely electric – is to be more than 75 per cent in Europe by the 2026 financial year. For Japan, the target is 55 per cent, and in China more than 40 per cent. A sales share of 40 per cent is also planned for the USA, but here only for the 2030 financial year.

“The role of companies to address societal needs is increasingly heightened,” says Nissan CEO Makoto Uchida. “With Nissan Ambition 2030, we will drive the new age of electrification, advance technologies to reduce carbon footprint and pursue new business opportunities. We want to transform Nissan to become a sustainable company that is truly needed by customers and society.”

‘Ambition 2030’ is the Japanese company’s strategic plan it unveiled in January 2021. At that time, the goal was proclaimed to become CO2-neutral by the year 2050 – both within the company and with regard to the life cycle of the products. As a concrete impact for new models, it said in January that from the early 2030s every new model in Japan, China, the USA and Europe should be electrified.

The company also unveiled four new concept vehicles as the “next stage of Nissan’s electrified future”. Called the Nissan Chill-Out, it is said to be the “next-generation crossover EV”. Like the announced production crossover Ariya, the Chill-Out is based on the CMF-EV platform and is said to feature a productive and comfortable interior – with the CMF-EV a battery-electric drive is set.

While the platform of the Chill-Out still bears a certain relation to the current models, the other three concept cars are clearly more futuristic. The Nissan Max-Out is an electric convertible with dynamic lines. The Hang-Out is a utility vehicle that is supposed to offer an innovative use of space. The Surf-Out, meanwhile, is a two-seater electric pickup for a range of leisure activities.

Tesla production in Berlin looking to take off this year