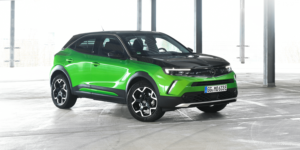 After Stellantis recently announced a range increase for the Peugeot e-208 and e-2008 as well as the DS 3 Crossback E-Tense, Opel’s electric models Corsa-e and Mokka-e also get more range.

According to Stellantis, the WLTP range of Opel’s electric cars will increase up to 359 kilometres (Corsa-e) and 338 kilometres (Mokka-e). As with the e-CMP sister models, the range increase is around seven per cent in the standard test. Depending on the outside temperatures, however, the effects in everyday driving should be greater, as Peugeot at least had emphasised.

Unsurprisingly, the measures taken on the Opel models correspond to those of Peugeot and DS: the Corsa-e gets new efficiency class A+ tyres for the 16-inch rims, the same applies to the Mokka-e for the 17-inch rims. In addition, the transmission ratio has been changed.

Stellantis hopes that the greatest effect will come from the new air-conditioning system and the control of the heat pump: this will also be coupled with a humidity sensor placed at the top of the windscreen. Not only is the heat pump itself supposed to be more efficient, but the software can also use the data from the sensor to better control the heating and air conditioning.

As in the corresponding announcements for Peugeot and DS, Stellantis does not mention any retrofitting for Opel models that have already been delivered. Given the major changes to the hardware – such as the transmission – this is highly unlikely.

For the Citroën ë-C4, which is also based on the e-CMP platform, the measures have not yet been announced. It is also unclear whether they will also come for the various light commercial vehicles from the Stellantis Group – such as the Citroën ë-Berlingo, Opel Combo-e or Zafira-e: although these use the 100 kW drive of the e-CMP, they are based on the larger EMP2.

First fully-electric Dodge is due to drop in 2024