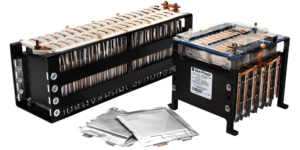 In the USA, the engine manufacturer Cummins is investing in the battery developer Sion Power. Together, the two sides intend to further develop Sion’s lithium metal battery technology called Licerion for applications in electric commercial vehicles.

Under the agreement, Sion Power will participate in a multi-year programme to develop large-format lithium metal battery cells for use in Cummins battery packs. These battery packs will be integrated into the electric powertrains of the US company’s future commercial vehicle portfolio. In an accompanying statement, Cummins says Sion Power’s battery chemistry is an important part of its roadmap to electrify its own commercial vehicles.

Sion Power developed its Licerion lithium metal anode battery cells in collaboration with BASF. In 2018, the manufacturer spoke of energy densities of 500 Wh/kg or 1,000 Wh/l and 450 charging cycles. In the current communication, there are no concrete details on this. The only statement is that their lithium metal batteries should contain twice as much energy as conventional lithium-ion batteries for the same size and weight.

Cummins states that the cell, incorporating Sion’s patented manufacturing process, forms the basis for a robust, long-lasting battery for Cummins’ demanding applications. “Our customers rely on Cummins to provide the most robust electric powertrains in the world,” said Amy Davis, vice president at Cummins and president of the New Power segment. “We need battery technologies that will meet the performance and cost expectations for tough, commercial vehicle duty cycles.”

Recently, Cummins’ increased involvement in the H2 sector has also attracted attention. The background to this is, among other things, the acquisition of the fuel cell manufacturer Hydrogenics GmbH in 2019. Through Hydrogenics, the American company has, among other things, recently been operating a plant in the German town of Herten, which initially focuses on the assembly of fuel cell systems for hydrogen trains from Alstom.