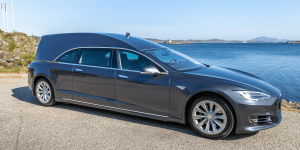 The UK sees a fully electric hearse based on the Tesla Model S coming to the south of England. The car is driven by Southern Co-op, operator of almost 60 funeral homes in Berkshire, Dorset, Hampshire, Isle of Wight, Somerset, Surrey, Sussex and Wiltshire. It is, however, not the first we hear of it.

British funeral car manufacturer Coleman Milne has been offering the Tesla doubling as an electric hearse since summer 2020 as reported. Their conversion was a collaboration with the German luxury coachbuilder Binz and will now go into, well, real-life service for the first time at Southern Co-op under the name Wisper (sic!).

Steve Pearce, Southern Co-op’s Chief Operating Officer for End of Life Services, commented: “This day has been a long time coming with delays caused by the pandemic and waiting for it to be approved for use on the UK’s roads. So this is definitely a time to celebrate, and we won’t waste any time in getting it on the road.”

In terms of technology, the hearse measures nearly six metres in length and has a 220-mile single-charge range powered at Southern Co-op sites using electricity from renewable sources.

The proposition of using an electric car for funerals is persuasive to the point of being a no brainer. Unsurprisingly, there have been a few Tesla conversions also in Norway or in the Netherlands as early as 2016. Not all of these very early attempts appeared entirely thought through – we remember Full Circle Funerals in Yorkshire, which in 2017 turned a Nissan Leaf into a hearse. Due to the small trunk, however, the coffin rides next to the driver.

Volocopter is withdrawing from planned US IPO