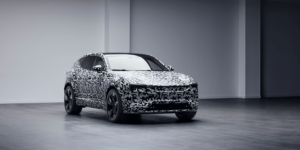 Polestar has given a preview of its Polestar 3 electric SUV planned for next year with a new teaser image. There are also new figures on the growth targets of the Swedish-Chinese electric brand.

First, to the Polestar 3; The model is not only the electric car brand’s first SUV, but also the first Polestar vehicle to be built in the US – more specifically, at Volvo’s Ridgeville plant in South Carolina.

The production version is to be unveiled next year, but based on the teaser image showing a vehicle in pixel camouflage film, some details can already be discerned. The front headlights appear to extend a little further up into the bonnet, and the front grille is also significantly flatter in the typical Polestar shape. As on the Polestar 2, the exterior mirrors appear to be relatively small for aerodynamic reasons, and they are also mounted on the door sill.

From diagonally in front of the vehicle, the roofline sloping down towards the rear can also be clearly seen. Polestar had already announced that the Polestar 3 will not have a third row of seats, so it will be offered as a five-seater at most. Polestar CEO Thomas Ingenlath expects the decision to differentiate the car from the Volvo XC90, which will also be built in Ridgeville in the future, but also to create an aerodynamic roofline, which should emphasise “the space between the first and second row”.

“We will build in America for Americans,” Ingenlath now says, according to the latest announcement. “Polestar 3 is planned to be launched in 2022 as a premium electric performance SUV that will define the look of SUVs in the electric age.”

Since Polestar does not give any performance details in the announcement, all that remains are the statements from September: the Polestar 3 is to get powertrains with one or two electric motors. As a distinction to the platform brother XC90, there will also be a particularly powerful version. So far, the range is said to be 600 kilometres+, and the Polestar 3 will be priced at the same level as a Porsche Cayenne.

At an event in the USA for the press and investors, Ingenlath also announced that the Polestar 3 will have lidar sensors from the US company Luminar, while the central computer will come from chip specialist Nvidia. In combination, both systems are supposed to enable autonomous driving on the motorway.