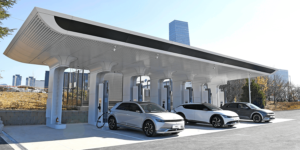 The government of South Korea is planning a significant expansion of the infrastructure for battery and hydrogen vehicles. By the end of this year there should be over 1,000 charging stations and 43 hydrogen stations along motorways by the end of 2022.

According to the South Korean Ministry of Transport, the number of charging stations at motorway service stations is to increase from 435 at the end of 2020 to over 730 by the end of this year and to over 1,000 next year. In addition, the number of twelve hydrogen filling stations currently in operation on motorways is to be increased to 43 in 2022 and to at least 52 in 2023.

According to a translation of the Korean government press release, the infrastructure programme is a cooperation between the Korean Ministry for Transport and the Korea Expressway Corporation. The two partners want to address an exponentially growing need for charging and hydrogen refuelling infrastructure for zero-emission vehicles.

The Korea Expressway Corporation is gradually increasing the amount of power produced through new and renewable energy generation along highways, and is gradually pursuing the implementation of an ‘energy-independent highway.’

The Korean Ministry for Transport says that currently there is 104 MW of highway solar power facilities in operation, and 76 MW of power generation facilities will be added by 2023 through the ‘Highway Solar Power Project Competition.’ Here, the government points out that fuel cell power generation is more effective than solar power generation since it is not intermittent and has fewer site requirements because it takes up less room. For the production of hydrogen in this highway project, the plan is to build a 48 MW facility in three idle areas of the highway by 2025.

South Korea is known for its strong automotive, battery and semiconductor industries, as well as driving the hydrogen economy forward. Not only is the country home to two of the world’s largest battery suppliers, SK On, and  LG Chem, but automotive giant Hyundai has been pushing the fuel cell vehicle drive in commercial vehicles and, for example, just last month, Plug Power and SK Group’s SK E&S division formed their joint venture announced earlier this year to provide fuel cell systems, hydrogen fueling stations and electrolyzers to the Korean and other Asian markets. Also in October just passed, Hyundai Mobis, the South Korean automotive supplier belonging to the Hyundai Motor Group, has announced that it will invest about 1.3 trillion won (equivalent to about 950 million euros) in the construction of two plants for fuel cell systems in the Korean cities of Incheon and Ulsan.

The S.Korean government is adamant in its support of zero-emission technologies as well as providing its population with support and incentives to decarbonise. In September just passed, South Korea passed a bill aiming for carbon-neutrality by 2050 as well as a large zero-emission transport budget for 2022. The National Assembly accelerated the targets for carbon reduction with the bill while the state aims to spend twelve trillion won ($10.3Bn) in 2022 on e-mobility. These include incentives for hydrogen and battery-electric vehicles, including charging stations, to be installed across South Korea.

In addition to promoting zero-emission mobility at home, the government has a keen interest in supporting its key industries. The government announced in the summer that it would provide domestic battery manufacturers with billions in investment. Furthermore, in February, a “shoulder-to-shoulder agreement with the car industry” was agreed upon, through which the prices for e-cars are to fall by the equivalent of at least 7,500 euros by 2025.