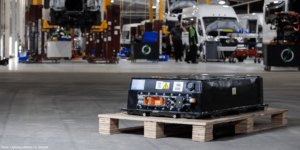 Lightning eMotors, a company specialising in electric vehicles for commercial fleet use, will in future also rely on batteries from CATL. For Lightning eMotors, this is the second battery order within a few weeks.

The agreement was executed through CATL distributor Coulomb Solutions, Inc. (CSI). This gives access to “multiple battery size and shape options”, which is critical to the goal of providing highly customised zero-emission commercial vehicles, Lightning said. The announcement does not say which models the CATL batteries will be fitted to.

“CATL has a proven lineup of battery pack configurations that will provide us with additional flexibility for our wide range of medium- and heavy-duty zero-emission commercial electric vehicles,” said Chelsea Ramm, vice president of global supply chain at Lightning eMotors. “CATL’s mature product portfolio, combined with our existing and ongoing partnerships, provides us with several efficient battery pack options as we work with customers to configure the right vehicles to fit their needs.”

It was only in mid-November that Lightning eMotors placed a much larger battery order. At that time, Proterra was contracted to supply battery systems with a total capacity of more than 900 MWh. These systems are to be installed in the Lightning Electric E-450 and Lightning Electric F-550 models.

The newly formed partnership between Lightning, CATL and CSI goes beyond a mere supply agreement. The three companies will jointly develop contactor safety switch systems for Lightning’s CATL battery packs. These switch systems will allow first responders to easily disable the vehicle’s entire EV powertrain in the event of a crash.