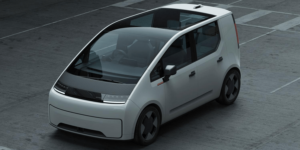 British electric vehicle developer Arrival has unveiled the first finished prototype of the Arrival Car, which is being developed with Uber for the ride-hailing business. Arrival will now begin testing the electric car and will incorporate feedback into the next design phase.

The production of the vehicle was previously announced for the third quarter of 2023. For the revealing of the Arrival Car prototype, Arrival made no mention of the planned production date.

So far, the company is not revealing details on the Arrival Car’s electric powertrain but has published two videos of the car on Twitter (linked below). Range and charging time are likely to be critical for ride-hailing applications. To ensure adequate coverage in London, Uber has invested in public charging infrastructure. Ride-hailing vehicles have to be robust. Here, Arrival points out that ride-hailing vehicles are driven an average of 45,000 to 50,000 kilometres per year, which is more than three times as much as a typical private car.

The first impressions of the ride-hailing vehicle present the body and interior concept. The Arrival Car is a van-like vehicle giving the driver a better overview of city traffic with the elevated seating position and large windshield, and affording the passengers in the back enough headroom and legroom. According to the videos published on Twitter, the legroom even exceeds that of a Rolls-Royce.

The materials used are designed for optimum cost and weight as well as durability for ride-hailing use. The grey cloth seats have a rugged finish. Other interior components are made of hard plastic so they are also tough and easy to clean. The back of the passenger seat can be folded down, creating a small work table for the driver. Overall, the Arrival Car is designed to prioritise “cost, uptime, driver comfort, safety and convenience.”

Like the delivery van and the announced electric bus, the Arrival Car will be built in micro-factories. With a concept of prioritising, smaller local manufacturing centres, Arrival aims to be more sustainable and less expensive.

Until the Arrival Car is built, the first step is the test phase. Feedback will then be incorporated into the next design phase to create the optimum characteristics for a vehicle tailored specifically for this market.

“Over the past six months, we have been working closely with Uber’s drivers to create a vehicle specifically for the ride-hailing industry, and making it affordable, durable and great to look at,” said Tom Elvidge, EVP Vehicle Platforms at Arrival. “We are keen on supporting drivers with this transition by developing the best possible product for ride-hailing that elevates the experience for both them and their passengers, making urban air clean in the process.”

Jamie Heywood, Regional General Manager for Northern and Eastern Europe at Uber said: “The first reveal of the Arrival Car is an exciting moment for Uber drivers, who are switching to electric vehicles at a much faster rate than the mass market.” Heywood revealed that the new vehicle will support Uber’s commitment for all cars on the app in London to be fully electric by 2025, saying that this will help drive a green recovery and to clean up urban transport.