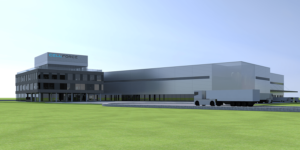 The location has now been chosen for the German battery cell factory planned for Cellforce Group, the battery joint venture between Porsche and Customcells. The industrial park lies across the districts of Reutlingen-Nord/Kirchentellinsfurt in the state of Baden-Wuerttemberg.

Back in September, there were reports that the location decision would be made soon. At the time, it was only certain that the cell factory would be built in Baden-Wuerttemberg, the German state with the highest number of car manufacturing plants in the country, but several other locations were still in the running.

Although the industrial park is called Reutlingen-Nord/Kirchentellinsfurt, most of the area lies in the district of Kirchentellinsfurt and the university town of Tuebingen. The direct municipality of the industrial park has a population of just under 5,600 and lies between Reutlingen and Tuebingen. Incidentally, the industrial park is also home to the headquarters of Manz AG, which produces cell contacting systems for battery production, among other things. So far, however, Cellforce has not received any orders from Manz; the joint venture has only ordered battery production tech from Dürr. Bernd Haug, mayor of the municipality of Kirchentellinsfurt, says: “The settlement of Cellforce’s factory of the future gives new impetus to the common economic area. But it also encourages us to expand inter-municipal cooperation further.”

Cellforce will acquire a 28,151-square-meter site in the industrial park. According to Porsche, the deciding factor for this location was its geographical position. “A clear commitment to Baden-Württemberg as a location was one of our key criteria. In Reutlingen-Nord/Kirchentellinsfurt, we benefit from short distances to numerous important research and industrialisation partners in the Stuttgart area,” says Markus Gräf, Chief Operating Officer of the Cellforce Group. “For us, the proximity of as many project partners as possible is the central prerequisite for rapid success.”

The industrial park is directly connected to the B464, and the B27 and B297 federal roads are within reach. The Porsche development site in Weissach is around 50 kilometres away via the B27 and A8 motorway, and the Customcells site in Tuebingen is even closer – Gräf refers to this as “a stone’s throw.”

It was previously said that the new cells would be used in high-performance electric sports cars from Porsche. Now the German luxury carmaker says it is “likely that the Cellforce battery cells will be installed in electrically powered Porsche models with high-performance drivetrains.”

Not much has been revealed about the cells at this point. Porsche CEO Oliver Blume had said that the automaker was working with silicon anodes. Cellforce now also confirms that this makes it possible to increase the energy density compared to current series batteries significantly. As a result, Cellforce believes the battery can be more compact with the same energy content. The two companies say that the new chemistry also reduces the battery’s internal resistance, meaning that it can absorb more energy during recuperation while being more powerful during fast charging. Another notable feature of the Cellforce battery cell is that it is more resistant to high temperatures.

In September, at the IAA Mobility, Porsche presented the Mission R racing car prototype, which would fit into the Cellforce battery cell scheme. However, Porsche has not yet announced a limited-edition road-going sports car with electric drive.

The German federal government and the state of Baden-Württemberg are funding the project with around 60 million euros.  The Cellforce Group recently received notification of funding from the German Federal Ministry of Economics as part of the European IPCEI project EuBatIn (Important Project of Common European Interest – European Battery Innovation). The project is to establish a competitive European value chain for lithium-ion batteries.

After receiving the first partial building permits, the Cellforce Group, the battery cell joint venture between Porsche and Customcells, has begun construction work on its new corporate headquarters. Earlier this year, the Cellforce Group had already informed its new neighbourhood in the Mahden industrial estate and the public in detail about the plans for its development and production site.

“We are pleased that we can already carry out preparatory earthworks and shoring work on the site,” says Dr. Markus Gräf, Managing Director of Cellforce Group GmbH. “This means we are getting a little closer every day to our goal of being able to move into our new site in the Mahden industrial estate at the end of 2023 and start pilot production in 2024. The construction work for this is in full swing.”

In addition to administrative buildings, facilities for researching cell chemistry and a pilot production facility for the small-scale production of battery cells are to be built on the site to test the batteries that have been developed. In addition, the Cellforce Group is planning a “state-of-the-art powerhouse to efficiently and sustainably manage its own energy needs on site”.