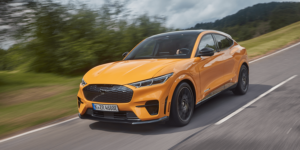 Ford has opened the order books for the 2022 Mustang Mach-E in the United States and has also confirmed pricing details. Prices for the electric SUV start at $44,995 for the Select RWD Standard Range including a $1,100 destination charge.

In terms of technical upgrades, the Mustang Mach-E has undergone several since the last model update. The 2022 Mustang Mach-E is announced with new trim options, such as the Ice White Appearance Package that is offered for Premium grade models, which includes a series of optical upgrades. Prices for the range top out at $69,095 for the GT Performance AWD Extended Range.

The battery has also been upgraded on all available models, with models equipped with the previous standard range battery previously offered up 68 kWh of usable capacity, which has been increased to 70 kWh for the new model. Extended range models with higher battery capacities jumped from 88 kWh to 91 kWh. While there is no official range rating for the upgrade yet, it is expected to yield somewhere around 5-10 miles of driveable difference.

Recently, Ford also announced plans to significantly upscale Mustang Mach-E production, as the demand has proven higher than expected. Production in China also recently commenced, and while during the year there had been issues with the software of the vehicle, it seems the company managed to iron out most of the problems.