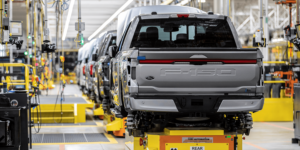 Ford has again increased the production target for the all-electric F-150 Lightning. At the Rouge Electric Vehicle Center in Dearborn, production of the electric vehicle is to be nearly doubled to 150,000 units annually in order to meet the high demand.

The US carmaker has now officially confirmed the new production target in an announcement; rumours had been circulating for some time. In August, the annual production target for the electric F-150 had already been doubled from 40,000 to 80,000. In other words, instead of 40,000 units per year as initially planned, the target is now almost four times as many vehicles.

Ford did not specify what work and measures are necessary to achieve the current increase in production targets. Nor is there any mention of additional investment in the Dearborn production facility. In 2020, Ford had invested around 700 million dollars in the plant complex, in the course of which the Rouge Electric Vehicle Centre was built next to the existing pickup plant. For the expansion from 40,000 to 80,000 units, Ford had invested another $250 million.

Ford CEO Jim Farley had already indicated in December that the availability of battery cells was the bottleneck for the F-150 Lightning. Ford would do “whatever it takes” to double production capacity for the electric F-150.

After the number of pre-orders for the F-150 Lightning almost reached the 200,000 mark, Ford recently imposed a reservation freeze in favour of firm orders. According to the new announcement, production will begin on Thursday this week for the first reservation holders. These will be invited to place their orders “in phases”. However, Ford does not expect to be able to supply all of the 200,000 reservation holders before 2022. “For those who don’t receive invites for the 2022 model year, there will be an opportunity to order for future model years,” Ford added.

Currently, the last pre-production examples are being built at the Rouge Electric Vehicle Centre, according to Ford. These vehicles will be subjected to further tests. In spring, the first units will come off the production line and be delivered to customers.

The electric pickup is not the first model for which Ford is adjusting its production upwards: In December, Ford had already announced a significant increase in production for its all-electric Mustang Mach-E: By 2023, Ford wants to achieve an annual output of more than 200,000 units of the electric vehicle – three times as many as were produced in 2021.

One day after Ford increased the production target for the all-electric F-150 Lightning to 150,000 units annually, the configurator has gone online. As a result, all prices are now known. As announced at the launch, the base Pro model starts from $39,974 before subsidies and the XLT trim from $52,974. New are the prices for the Lariat (from $67,474) and Platinum ($90,874) trims.

The base model is available for private customers only with the standard range battery, the top model Platinum only with the extended range battery. For the two mid-range models, the prices quoted are with the small battery; the large battery can be ordered here as an option. The additional 33 kWh, however, costs an extra $10,000. Fleet customers will also be able to order the large battery for the Pro for the same surcharge.

Change in management strategy at Aiways