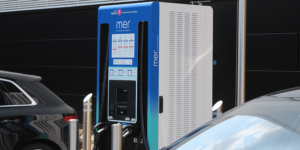 The European charging infrastructure brand Mer from the Norwegian renewable energy group Statkraft will take over the British charging specialist Elmtronics. The takeover is still subject to approval by the relevant authorities and is expected to be completed by the end of January 2022.

Elmtronics says that the takeover should allow Mer and Elmtronics to bring economies of scale into the development of EV charging solutions as well as being able to provide better value to existing and new customers.

Statkraft’s Mer is a combination of German, UK and Norwegian charging service providers that had already been operating in the UK under Gronn Kontakt UK. In 2020, Statkraft took over Vattenfall electric charging network in the UK. In April last year, Mer launched into the UK charging market with the recently acquired Mer that was previously known as Gronn Kontakt UK. In July 2021, Octopus Energy and Mer agreed to a UK roaming deal.

Kristoffer Thoner, CEO, Mer Group said that the acquisition of Elmtronics is proof of Mer’s step-change ambitions to accelerate the EV transition in the UK. “While Mer UK’s expertise and focus lies mostly within the area of public fast charging, Elmtronics mainly focuses on fleet and workplace charging,” he explained. “In combination, these efforts will give Mer a significant stronger position in the UK market.“

The rebranding of Elmtronics to Mer should begin this quarter.