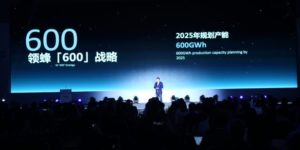 SVOLT presented its new product category from the lithium iron phosphate battery cell family at a company event. The cell variant with LiFePO4 cell chemistry is expected to be produced from the third quarter of 2022.

As SVOLT now announces, the event in China already took place on 8 December 2021. In front of more than 400 participants, company president Hongxin Yang presented the so-called “short-blade battery”. The name is probably a reference to the form factor of the cells (more on this in a moment), but also an allusion to BYD’s ‘blade battery’, which is also based on LFP cell chemistry.

The short-blade cell family currently comprises four products, called L300, L400, L500 and L600. SVOLT gives some more data on the L600, which will be the first to be produced in the third quarter. The cell voltage is 3.2 volts, the energy content 627.2 Wh, the capacity 196 Ah. The gravimetric energy density of the cell is given as 185 Wh/kg, the volumetric energy density as 430 Wh/l. A Short Blade cell is 21.5 millimetres thick, 118 millimetres wide and 574 millimetres long. For comparison: BYD’s blade battery is the same width, slightly flatter but 905 millimetres long. In terms of capacity, energy content and energy density, both batteries are at a comparable level – sometimes with advantages for BYD, sometimes for SVOLT.

The L300 and L600 are primarily intended for use in battery-electric vehicles. The L400 is intended for hybrid vehicles, the L500 is suitable for commercial vehicles. In the case of the L500, SVOLT mentions that this cell is CTP-capable, i.e. it can be installed directly in a battery pack without the diversions via a battery module.

According to SVOLT, the L300 series is primarily intended for 800-volt high-end models. Accordingly, this battery was designed for a fast charging performance of 2.2 to 4C. To suit these cells, SVOLT has also presented a 4C fast-charging technology, a special thermal insulation for precisely those 800-volt charging systems and an advanced heat pump.

As Kai-Uwe Wollenhaupt, President SVOLT Europe & Vice President SVOLT Energy Technology, explains, these performance data were made possible by a newly developed anode. “Thanks to various further developments, LFP cells now achieve an energy density relevant for use in electromobility and are now also being installed by OEMs in entry-segment vehicles such as small city cars,” says Wollenhaupt. “SVOLT has also been working for some time on increasing the energy density of LFP cells by optimising the anode material. We are therefore pleased that we can now present this new product category to our customers for the first time.”

“Now is the right time to take a global leadership role in the electric mobility market and deeply embed the SVOLT brand in the minds of our customers,” says Hongxin. “This is another reason why we plan to set up a dedicated production facility for short-blade cells of 20 GWh. We believe they will be among the most competitive products of the future.” He did not, however, give details of the production facility.

In its now published announcement, SVOLT now also officially confirms its intention to increase its global production capacity to 600 GWh by 2025, as previously leaked.