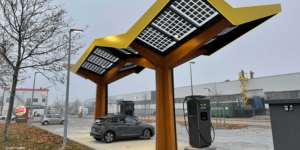 Fastned has won tenders from Autoroutes du Sud de la France (ASF) to develop and operate three other fast-charging parks on motorways in France. The three new sites are located in the south of France.

They are located at the rest stops Aire de la Plaine Forez Est (A 72), Aire d’Ambussum Nord (A 9) and Aire des Jardins des Causses du Lot (A 20). So once south of Lyon, between Montpellier and Nimes and north of Toulouse.

Each fast-charging hub will initially have eight charging points, each capable of delivering up to 300 kW. Fastned expects to complete the stations by the end of 2022.

“We are very happy that we have been selected by ASF as a charging company to realise and operate fast-charging stations along key motorways in France,” said Michiel Langezaal, CEO Fastned. “Making available large locations via long term leases is crucial for the construction of high-quality charging infrastructure.”

Fastned, in November 2020, won its first French tender for nine sites commissioned by the French freeway and toll group APRR/AREA as reported. Recently, Fastned opened the first six sites resulting from this tender. Two more stations will open in the coming weeks along the A5 (south of Paris) route to Switzerland.

The latest tender is part of a push by the French Ministry of Ecological Transition that has set the goal to equip all 360 private motorway service areas with charging infrastructure by the end of 2022. As a result, ASF and APRR/AREA and service station operators VINCI and SANEF and their subsidiaries have since opened tenders for fast-charging hubs. Fastned says it is bidding for about a third of these service areas.

Based in Amsterdam, the company claims it has built 188 fast-charging stations in the Netherlands, Germany, the United Kingdom, Belgium, France and Switzerland. Fastned is listed on Euronext Amsterdam (ticker AMS: FAST).