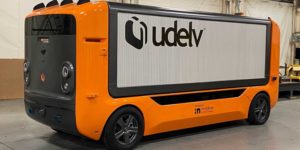 The Californian company Udelv presented an electric self-driving van without a driver’s cab at the CES. The autonomous van is not only designed for urban deliveries but also motorway speeds.

The electric delivery vehicle can carry up to 2,000 pounds (about 900 kilograms) of goods and, according to Udelv, can achieve ranges of between 160 and 300 miles (257 or 482 kilometres), depending on the battery option. The batteries hold either 90 or 160 kWh and can be recharged in 45 minutes for 354 kilometres (220 miles) via DC fast charging. The top speed of the so-called uPod is 112 km/h. The company does not yet provide any information on the drive itself.

Visually, the uPod is reminiscent of other autonomous shuttles and vans: the drive technology is built into the flat platform. It is unclear from the press release whether there are wheel hub motors, axle motors or one internal motor per wheel. The wheels are located at the outermost corners of the platform to maximise the available cargo space within the footprint.

A big difference from other models: On the uPod, the platform is not entirely flat, but there are still superstructures at the front and back – these house MobilEye’s autonomous driving technology. Only the space between the superstructures can be used for the cargo module.

The schedule is tight as the company wants to commercialise the transporter, i.e. series produce the van as early as 2023. By 2028, Udelv wants to have 50,000 electric vans in use. In 2018, Udelv had already presented an autonomous e-delivery vehicle, but at that time, it still had a driver’s cab.

The Udelv uPod is not the only e-transporter at the CES: The start-up Indigo Technologies also presented an e-delivery vehicle in Las Vegas with the Flow Plus – but with a driver’s cab.

Udelv is led by CEO Daniel Laury and CTO Akshat Patel, former Tesla and Apple engineers. The company is also listed on the California DMV Autonomous Vehicle Tester Program under the name of CarOne LLC.