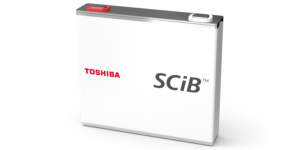 Toshiba is expanding its SCiB range with the new 20 Ah HP lithium-ion battery cell. The new lithium titanium oxide cell is said to be suitable for a wider range of applications than the predecessor model – for example in buses, but also plug-in hybrid cars.

Compared to Toshiba’s current 20 Ah cell, the new 20 Ah HP cell delivers 1.7 times more input power and 1.6 times more output power for the same size, which Toshiba says is achieved by reducing the resistance in the cell by about 40 per cent. Specifically, at a nominal voltage of 2.3 volts, this translates into an output and input power of 1,900 watts for ten seconds when the charge level is at least 50 per cent. Since less heat is generated as soon as large currents flow, a simpler cooling system can also be installed, says the manufacturer. “Depending on the customer’s system”, “forced air cooling” instead of water cooling is also possible – or natural air cooling instead of forced air cooling.

One of the prismatic cells weighs around 545 grams and measures 116x22x106 millimetres. This corresponds to a volumetric energy density of 176 Wh/l and a gravimetric energy density of 84 Wh/kg. The new cell thus comes to the same dimensions as the current model, so that customers can “easily upgrade to the improved performance with the same module package”, Toshiba promises.

The new 20 Ah HP cell also achieves longer life than the current 20 Ah cell, according to Toshiba, by reducing heat generation during continuous charging and discharging due to its lower internal resistance. Under laboratory conditions, the 20 Ah HP cell still reached a capacity of almost 100 per cent after 8,000 charge/discharge cycles, while the older 20 Ah cell already showed ten per cent degradation.

Like the well-known nickel-manganese-cobalt batteries, nickel-cobalt-aluminium cells or lithium-iron-phosphate cells, LTO batteries belong to the lithium-ion batteries. Here, however, the lithium titanate is not attached to the cathode but to the anode instead of the graphite – the cathode can be either NMC- or LFP-based. LTO batteries can handle high charge/discharge currents and are less susceptible to low temperatures and deep discharge. However, their energy density is significantly lower than NCM or NCA cells. Therefore, they have not yet become established in electric cars, but are rather used in electric buses – where the energy density is not so crucial for batteries installed on the vehicle roof.