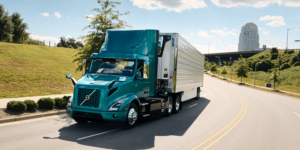 Volvo Trucks North America has unveiled the next generation of its VNR Electric all-electric heavy-duty truck with longer range and shorter charging times. Production of the upgraded model is scheduled to begin in the second quarter of 2022. Orders are available now.

The Volvo VNR Electric is one of six all-electric heavy-duty truck models from Volvo Trucks developed specifically for the North American market. Customers were able to place initial orders for the previous model in December 2020, with production starting in the second quarter of 2021 at the company’s New River Valley production plant in Dublin, Virginia. According to the company, the vehicle has been delivered to customers in several US states over the past year. Operational data was collected to improve the technology and increase efficiency.

Nearly a year later, the company is now in launch position with the new version of the Class 8 electric truck. “Volvo Trucks continues to build on the capabilities of the VNR Electric to make it more efficient, meet our customers’ demands for longer range and offer a better driving experience,” Andy Brown, product marketing manager for electric mobility at Volvo Trucks, is quoted as saying in a press release.

The next model of the VNR Electric is now available with a new battery design: the changes reportedly result in an increase in storage capacity of up to 40 per cent for each battery. Together with a new battery option that incorporates six packs instead of the previous maximum of four, a total capacity of up to 565 kWh and a range of up to 275 miles (about 440 kilometres) is possible, the manufacturer said. The first generation of the Volvo VNR Electric had a range of up to 150 miles (240 kilometres).

Volvo Trucks will also install a battery thermal management system (BTMS) to keep the battery in the ideal temperature window – which will help with both durability and charging. The company specifies a charging power of 250 kW. An 80-percent charge is thus feasible in 90 minutes in the six-battery version. For the four-battery package, the charging time is 60 minutes.

The truck manufacturer also states in the release that it is expanding its electric vehicle dealer network. Volvo Trucks has certified dealers in California and New York and is working with additional dealers across North America to complete their certifications, it said. A sales team has also been established to support dealers and customers, he said.

Volvo Trucks has set a target of half of all trucks sold being electric by 2030. Recently, as reported, the first independent energy efficiency test with a heavy-duty e-truck was completed in Germany. The Volvo FH Electric covered a total of 345 kilometres on one battery charge on the so-called Green Truck Award route. According to the company, it exceeded its official range and consumed 50 per cent less energy than its diesel counterpart.