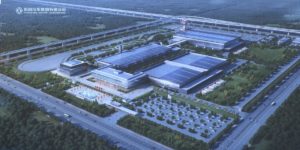 The Chinese manufacturer Dongfeng Motor has started building a new production facility for electric off-road vehicles in Wuhan. This is scheduled to start production in 2023 with a planned capacity of 10,000 vehicles.

The vehicles will be built on a new off-road platform developed by Dongfeng called MORV, which is designed exclusively for New Energy Vehicles – namely BEV, PHEV and FCEV. Technical data on the platform or the planned models are not yet known.

The new plant will be built on a 96,000 square metre area. The facility will include a complete production with body shop, welding, paint shop and assembly, as well as a test centre with off-road tracks.

According to Gasgoo, the vehicles are to be “high-end off-roaders” that will be developed under the management of Dongfeng’s “M” business unit. Dongfeng is one of the largest truck manufacturers in the world, but also builds passenger cars and military vehicles. Dongfeng has several joint ventures for passenger cars, including with Nissan, Honda, Stellantis and Kia.

The off-road vehicle project is not the only approach with which Dongfeng wants to score points in the Chinese passenger car market in the future. Dongfeng Motor is also behind Voyah, a premium brand for electric cars. The brand was founded in 2020 and started delivering its first vehicles in August 2021. There were a total of 6,791 vehicles delivered last year, however, 3,330 of them took place in December alone.

The first model, the Voyah Free, is an SUV designed by VW subsidiary Italdesign. Voyah has also introduced a van, the Dreamer.