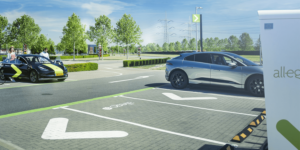 Allego has been awarded 14 more HPC sites on motorways in Flanders. These 14 new sites complement two motorway sites for which Allego was already selected by the Flemish Agency for Roads and Transport in 2020.

In the first phase, Allego plans to install two HPC columns and two AC chargers at each of the 14 new sites by the end of 2022. In the second phase, the total number of HPC stations is to be increased to 56 by mid-2024 – i.e. arithmetically four per location. Allego does not specify which charging station models will be used in the announcement. In January 2021, the Dutch company announced that in future it would also rely on fast charging columns from Tritium and Alpitronic – in addition to the DC columns from the Portuguese manufacturer Efacec.

According to Allego, the Flemish sites are distributed “along the main transport corridors throughout Flanders”. However, the charging parks will not be located at service areas, but primarily at Park&Ride car parks, which are located directly at motorway slip roads. Those who use the Park&Ride car park as such can use the AC charging points. It is not clear from the Allego announcement whether there are any catering facilities or toilets on site for the duration of the HPC charging process.

The HPC project is not the only major contract Allego has won in Flanders. In January 2020, network operator Fluvius had contracted Allego to install 1,300 additional charging points in Flanders. This was the fourth and final concession under the Flemish CPT (Clean Power for Transport) action plan – as Allego had already won more of the concessions since 2017, Allego operates 4,300 of the 5,000 public charging points from the CTP plan.