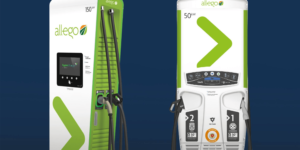 The first fast chargers from Alpitronic and Tritium are to be installed at new Allego HPC sites during the first half of 2021. In the image Allego posted on related social media posts about the announcement, an Alpitronic Hypercharger in the 150-kW version and a 50-kW charger from Tritium can be seen in Allego’s white and green colors.

The Dutch company is not yet providing details on the technical specifications of the charging columns. Both manufacturers also offer charging columns with higher charging capacities. It is clear, however, that Allego will not only rely on CCS for the new charging stations: A CHAdeMO cable can also be seen on each of the two columns.

The Hypercharger from the South Tyrolean company Alpitronic is currently one of the most sought-after HPC charging columns – major charging network operators such as EnBW and Fastned rely on various versions of the Hypercharger, but the mineral oil company is also using Hyperchargers instead of the previously installed Efacec chargers at the new charging station at the Aral filling station in Wuppertal. Aldi Süd also plans to use Hyperchargers in the construction of a further 1,500 charging stations at its stores.

The Australian manufacturer Tritium is best known in Europe for its Ionity charging columns: Along with ABB, Tritium is one of the suppliers for Ionity’s fast charging network. In Germany, the Tritium columns, which are characterized by their flat design, are in use in Hamburg, among other places.