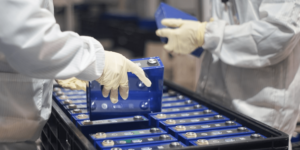 Ganfeng LiEnergy, a subsidiary of lithium producer Ganfeng Lithium, has started operating a battery factory with an annual capacity of ten GWh in Xinyu in China’s Jiangxi province.

This is the second phase of the factory, which now covers 330,000 square metres, according to Ganfeng Lithium’s WeChat account. The factory has production lines for prismatic lithium iron phosphate batteries, pouch cells as well as solid-state batteries.

The plant is said to have a particularly high degree of automation, which Ganfeng says offers three times the efficiency of manual operation. However, it is unclear what Ganfeng defines as manual operation and how great the efficiency is compared to the otherwise usual degrees of automation. However, it also says that the quality of the products should be consistently high thanks to a real-time feedback capability and the traceability of the ERP (Enterprise Resource Planning) system and the MES (Manufacturing Execution System) system.

The production value of the second stage is expected to be ten billion yuan, or the equivalent of 1.39 billion euros, according to Ganfeng Lithium. More than 4,000 jobs have been created at the plant.

The E70 is an electric sedan. The vehicles will be used and tested as taxis in Jiangxi, Guangzhou, Zhejiang and Jiangsu. Dongfeng and Ganfeng have not yet provided details on the battery – such as energy content and energy density – or the range of the vehicle. Ganfeng had confirmed in July 2019 that it was working on the first generation of solid-state batteries. According to later information, the second generation will have an energy density of 360 Wh/kg. It is not known whether these cells are already installed in the pilot vehicles.