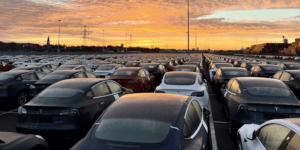 ‘Autonomy’ is a new offer in California where TrueCar founder Scott Painter offers Tesla Model 3 cars for a monthly flat rate. The new venture has acquired about 100 vehicles from Tesla and has ambitious expansion plans.

By the end of this quarter, Autonomy wants to run a 500-strong fleet and have no less than 10,000 Model 3 out to rent by the end of the year. Starting in California with HQs in Santa Monica, the company aims to include other states in the US and eventually other electric vehicle brands in future.

Looking at the sheer number of cars scheduled in, Bloomberg writes, Autonomy managed to buy cars from Tesla so quickly because they were flexible on configurations like colour or wheel choice – things regular customers often feel strongly about.

Autonomy has also released the first details on the service and promises that people can order a vehicle in ten minutes after providing a driver’s license and payment. The subscription has a three-month minimum and then goes month-to-month. Prices vary, with one option being an initial fee of $5,500 and a monthly rate of $550. Looking at the Tesla website for comparison, Bloomberg found a 36-month lease of a blue Model 3 Long Range vehicle requires an estimated $4,500 down with $561 a month payments.

So Autonomy’s claim of being “the cheapest” way to get a Tesla Model 3 is to be taken with a grain of salt, although the entry offer includes only “low mileage” Teslas. In any case, Autonomy might indeed be one of the faster ways out there at the moment. Apart from the claimed ten-minute registration, the startup also states that the vehicle delivery or pick up at a dealership would transpire in under twenty minutes. Moreover, consumers can digitally manage their entire vehicle subscription through the mobile app – currently available only for iPhone.

“Electric vehicles have reached a tipping point, and it’s clear that the Tesla Model 3 is this generation’s Prius,” said Scott Painter, founder and CEO of Autonomy. “Financial responsibility and the avoidance of debt is also at an inflexion point, and subscriptions have become a pervasive, sustainable business model and a cornerstone of modern digital life.” The entrepreneur had previously ventured into Car-as-a-Service offers, CaaS in short.

Autonomy is now taking reservations online, which require a $100 deposit (applied to the $500 security deposit at activation). The company recently raised $83 million in debt and equity financing to support the launch.