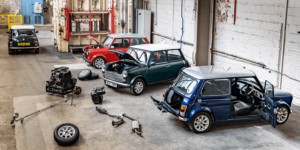 According to BMW, the electric motor generates a continuous output of up to 90 kW. The energy is supplied by a high-voltage battery that can be charged with an output of up to 6.6 kW and enables a predicted range of around 160 kilometres. However, the energy content of the battery is not mentioned.

Mini emphasises that the conversion to the electric drive system combines tradition with “pioneering technology” “entirely in the spirit of the circular economy”. However, it is also made clear that no irrevocable changes will be made to the substance of the vehicle during the conversion. This means that it will even be possible to restore the vehicle to its original condition at a later date, as the combustion engine will be marked and stored. “Careful handling of the historical heritage is an important part of the concept,” says BMW.

“What the project team are developing preserves the character of the classic Mini and enables its fans to enjoy all-electric performance. With MINI Recharged, we are connecting the past with the future of the brand,” says Bernd Körber, Head of the Mini brand. However, Mini does not state in the announcement how much the conversion will cost.

The idea of an electric vehicle retrofit for the classic Mini is not new. BMW itself had built and presented a one-off in 2018 for the New York Auto Show. As a result of the positive reactions, a plan was developed in Oxford on how the retrofit could be made available to more owners of a classic Mini.

The potential of the small car, which was introduced in 1959, has already been recognised by other companies. For example, the British company Swindon Powertrain offers its own conversion kit for the electric Mini.