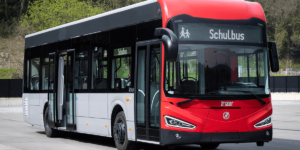 The Spanish manufacturer Irizar has revealed another electric bus order from Rheinbahn in Düsseldorf, Germany. The transport company has now ordered eight more examples of the 12-metre version of the ie bus.

According to Irizar, the new electric buses have a new generation of batteries and a reduced weight. The batteries are charged overnight. The buses will replace those lost in a fire at the depot last year.

According to previous reports, the 12-metre long solo buses can have batteries of up to 350 kWh installed. The drive has a maximum output of 180 kW. The solo bus has three doors, 26 seats and a wheelchair area. Including the standing room, a maximum of 77 passengers can be carried. The glazed side walls are intended to create a brighter and friendlier interior, and there are also USB charging points for passengers’ mobile devices.

The original buses were purchased when Rheinbahn ordered ten examples of the 12-metre version of the ie bus from Irizar in 2019, which went into operation at the end of 2020. Klaus Klar, CEO of Rheinbahn said at the time: “We are pleased that with the new electric buses we are creating even more incentives for our passengers to opt for climate-friendly mobility and making Rheinbahn the first choice for mobility in Düsseldorf and the region.”