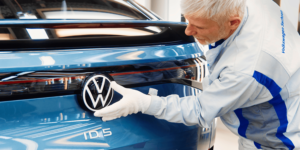 VW has now officially started production of the ID.5 and ID.5 GTX in Zwickau and has thus completed the transformation of the vehicle plant into a pure electric car plant, as announced last November. The 2022 production will exceed the 180,000 electric cars VW made here last year.

As Volkswagen states, this makes Zwickau the world’s first large-scale production plant of a volume manufacturer to be completely converted from vehicles with combustion engines to electric drives. By this, of course, Volkswagen only means with unchanged ownership, because Tesla’s pure electric car factory in Fremont was once also an internal combustion engine plant of volume manufacturer Toyota. And in the premium segment, this step has also already been taken, for example the Audi plant in Brussels.

In Zwickau, six models of the VW, Audi and Cupra brands are now being produced on the basis of the modular electric drive system (MEB) – the Curpa Born, Audi Q4 e-tron, Q4 e-tron Sportback as well as Volkswagen’s ID.3, ID.4 and now also the ID.5 – the pre-series production of which has already been running since February 2021. Of the MEB models, only the Skoda Enyaq is not being built in Zwickau in Europe.

“The Zwickau production plant has paved the way for the Group to do this with six ramp-ups from three brands in just 26 months,” says Christian Vollmer, Member of the Board of Management for Production at the Volkswagen Brand. “The knowledge and experience gained will help us to continue to electrify our production network quickly and efficiently.”

In Zwickau, the workforce is focusing on further scaling, according to Stefan Loth, chairman of the Volkswagen Saxony management board. “Our focus now – depending on how the semiconductor situation pans out – will be on achieving full capacity,” Loth said. “This year we aim to exceed the 180,000 vehicles Volkswagen Saxony built in 2021.” But this also means that even at the electric car plant, which managed to get through the semiconductor bottlenecks relatively well in 2021 compared to the main plant in Wolfsburg, the lack of chips will remain an issue in 2022.

Possibly also for this reason, the works council does not doubt the MEB vehicles. “Switching over to electric vehicle production was exactly the right decision for the Zwickau plant,” says Jens Rothe, Chairman of the General Works Council of Volkswagen Saxony. “Demand for our models is booming, and our team’s jobs will be safe for years to come. We are a trailblazer of change and have repaid the Group’s trust in us.”

Volkswagen has invested around €1.2 billion in the plant’s transformation since 2018. Production of the ID.3 started in September 2019. As the latest and, for the time being, last Zwickau model, VW unveiled the ID.5 in November, and pre-sales of the SUV coupé started shortly afterwards.

BMW to stop i3 production in July