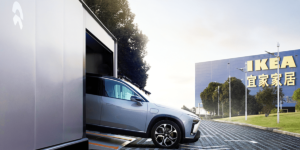 Staying in China, for now, Nio had announced in September last year its intention to massively expand its battery swap network by the start of the Chinese New Year, which is now imminent.

According to the announcement, eight major highways and four densely populated metropolitan areas were to be covered by 31 January. However, according to Nio, only 94 per cent of this target has been reached, which is why the company apologized to customers in its app.

Note, however, that the expansion has been tremendous: on 21 January, Nio said it had put 800 stations into operation, and in the 33 days before that, another 100. Thus, three new stations have been opened per day virtually since Christmas. Data that Nio published on 28 January now shows 828 stations – so in the past seven days, there have been an average of four new stations per day. Of these 828 stations, 220 are on highways, meaning that the company has come very close to its September target and only failed in covering all areas as planned.

By the end of 2022, Nio aims to operate a network of more than 1,300 exchange stations in China. Nio presented the second generation of its exchange stations, which can change up to 312 batteries per day, in April 2021. At the same time, the company had also signed a strategic deal with Chinese petroleum company Sinopec to help the roll-out. The cooperation’s primary goal is to build a network of 5,000 charging and swapping stations for electric car batteries by 2025.

On Wednesday, Nio tweeted that it had opened its first ‘Power Swap Station’ on the continent. Unsurprisingly, it is located in Norway, Nio’s first European market. When Nio announced its entry into the Norwegian market in May 2021, the first step was to promise four swap stations for the Oslo metropolitan area, which Nio would then supplement over time with battery swap stations in major Norwegian cities.

The company also confirmed plans launch in Germany in 2022 and that it would introduce “its products and holistic service system to the Netherlands, Sweden and Denmark” as well this year. It is becoming clearer that Nio wants to bring its cars and battery-swapping systems to these European countries. The first battery swapping stations has already been certified by TÜV in Germany.