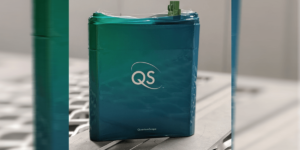 Solid-state battery specialist and Volkswagen partner QuantumScape has published data showing that its lithium metal solid-state battery cells retained more than 80 per cent of their initial energy after 400 cycles of 15-minute fast charging.

According to the release, this was not a full cycle, but rather the range between ten and 80 per cent SoC that is relevant for fast charging. The company does not specify the exact remaining capacity after the 400 cycles, but “well over 80 per cent of the initial energy” was retained, according to QuantumScape.

The tests were conducted with “single-layer prototype battery cells of commercially relevant size” at several temperatures between 25 and 45 degrees Celsius. For comparison purposes, “battery cells from a commercially available third-party electric vehicle” were tested using the same protocol. These cells would have “rapidly deteriorated after only a few dozen charging cycles”.

It should be mentioned here that both cells were charged from ten to 80 per cent in 15 minutes. According to the white paper on the charging tests published by QuantumScape in the meantime, the comparison cell is a round cell from Panasonic in the 2170 format – i.e. as manufactured in the Gigafactory 1 in Nevada and installed in the Tesla Model 3 and Model Y in Fremont. While the QuantumScape cell was designed for this charging scenario from the outset, this is not the case with the comparison cell – the charging time for the Tesla models mentioned is longer. In order to protect the battery from permanent damage and repeated fast charging with very high power (especially at the graphite anode), the charging power is regulated at a certain point, which increases the charging time. It is therefore likely that the comparison cell was charged outside its intended operating conditions, which could explain the enormous premature ageing.

“We believe QuantumScape’s lithium-metal technology provides a pathway to significantly improved fast-charging performance in EVs,” said Jagdeep Singh, co-founder and CEO of QuantumScape. “We believe innovations like this are crucial to narrowing the performance gap between EVs and combustion-engine based vehicles, and represent the future of the electrified transportation sector.”

QuantumScape calculates that the 400 cycles on an electric car with 400 miles of range (644 kilometres) equates to a total mileage of 160,000 miles or 257,500 kilometres. It must be mentioned that QuantumScape only used 70 per cent of the maximum possible amount of energy in the fast-charging test and that the standard ranges are usually not achieved in everyday life. In practice, 400 cycles should result in a significantly lower total mileage. For this reason, too, 800 to 1,000 cycles are generally regarded as a kind of unofficial industry standard.

If the electric vehicle with such a battery is predominantly charged slowly, higher values for the remaining capacity can naturally be achieved with the same total mileage. QuantumScape, however, sees fast charging as an important factor in contributing to the spread of electric cars. As the company writes: “Internal combustion engine vehicles can be refueled in about 5 minutes, whereas today’s leading lithium-ion electric vehicle (EV) batteries typically need around 30 minutes to fast charge from 10% to 80% capacity at a rate that doesn’t reduce the battery’s lifetime. This longer charge time prevents EVs from providing the same user experience as internal combustion engine vehicles. If QuantumScape can successfully deliver today’s demonstrated capability into the marketplace, the time difference between recharging EVs and refueling their combustion-engine counterparts will be only several minutes, which could help enable broader EV adoption.”