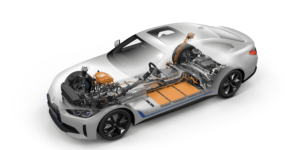 Just a few months after BMW started delivering the i4, there is already a recall. An entry in the EU Commission’s Safety Gate shows that BMW i4 vehicles produced between 15 September and 30 November 2021 may not have any battery crash pads fitted.

The reason for the i4 recall so shortly after its release, is that there is a risk of fire in the event of a serious side crash due to lacking crash pads around the battery, according to BMW. The number of vehicles potentially affected by the missing crash pads is not known at this point. The first defective units were discovered in Germany. Shortly thereafter, similar reports were made in Denmark, Poland, and Sweden. According to BMW, the cars built between September 15 and November 30 last year are affected.

As a BMW spokesperson explained to electrive, the information that that no battery crash pads were fitted in the affected vehicles was inaccurate. Rather, it is still unclear whether they were installed completely. This could mean that individual pads are missing, however. This will be checked and the possibly missing pads will be retrofitted. According to the spokesperson, 315 i4s are currently potentially affected, 69 of which are in Germany.

Tesla will run a dedicated commuter train to Giga Berlin