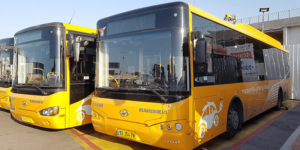 Israel has ordered all bus operators in the country to buy only electric buses from 2026. The Ministry of Environmental Protection also announced intermediate targets to reach 100% zero-emission public transport by 2036.

By 2024 at least 30 per cent of the buses purchased must be zero-emission ones, and by 2025 half of the procured buses should be emission-free, the Ministry said in a statement on Tuesday.

In contrast, electric buses cut greenhouse gas emissions by up to 80 per cent and reduce noise by threefold, it concluded.

The directives do not come out of the blue. In August last year, the Government in Israel had increased the funding to go towards electric buses. The latest budget was 59 million shekels (about 15 million euros) to help transport companies purchase about 200 electric buses as reported.

Egged, one of the country’s largest bus companies, had followed suit in November 2021 and ordered 100 e-buses from BYD set to arrive this year.

The government made no note in today’s announcement of further funding opportunities to help bus operators reach the targets.