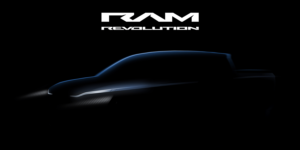 Ram Trucks, the US commercial vehicle subsidiary of the Stellantis Group, has announced a battery-electric version of its Ram 1500 pickup truck for 2024 and shown the first teaser. Ram aims to electrify all of its vehicle segments by 2030 at the latest.

Fans who register on the new “Ram Revolution” platform will receive exclusive insider information over time about how Ram plans to “revolutionise the pickup truck market once again”, meaning to finally electrify its vehicle offerings.

On Ram’s late entry to the electric pickup market where Ford can’t keep up with unexpected demand, CEO Carlos Tavares told Motortrend: “It’s a fact that we are coming slightly after (the competition), but it’s also a fact that we have the opportunity to adjust the competitiveness and the appeal of our own trucks to what they are doing, which is a competitive game, which is a fantastic situation for the consumer because the real winner of this competition is the consumer.”

The Ram was once a Dodge pickup model but was established as a stand-alone truck brand in 2009. The 1500 is between 5.81 and 6.14 metres long, depending on the version, and comes with a payload of up to 915 kilograms. The model is powered either by a three-litre diesel, two mild hybrids (as V6 or V8) or, in the TRX version, by a 523 kW V8 engine.

In early July 2021, Stellantis had presented its electric strategy, announcing among other things that Ram would sell an electric version of the 1500 in 2024. Four platforms for the group’s electric cars were also announced at the event, including “STLA Frame”, a dedicated platform for ladder-frame e-pickups and utility vehicles. As the range should remain sufficient even with heavy loads, the batteries will have a capacity of between 159 and 200 kWh.

The largest of the three drive modules being developed for the Stellantis platforms is intended for the SLTA Frame. The EDM3 (Electric Drive Module) offers between 150 and 330 kW per motor. The EDM3 is the only one of the three units that will also be available in an 800-volt version – EDM1 and EDM2 for the other platforms from small cars to luxury cars are pure 400-volt units.

Even though a first teaser image of the vehicle has been released, the final design has yet to be finalised and is now being worked out together with the brand’s fans.

Nissan is getting ready to drop the combustion engine