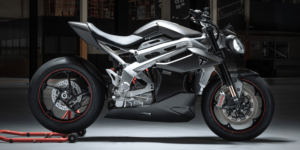 The British brand Triumph Motorcycles has presented the prototype of an electric motorbike, the TE-1. The machine was developed in a joint project with Williams Advanced Engineering and the University of Warwick. Now the TE-1 is to be tested for six months.

The fast-charging electric motorbike has a special battery pack developed by Williams with a capacity of 15 kWh and comes to 80 kW continuous power or 130 kW peak power. Williams has also developed what it claims is completely new battery management software, an integrated vehicle control unit and a compact DC-DC converter tailored to the limited installation space in the electric motorcycle.

Advantageous for riders is that the bike’s components are specially adapted to the motorbike. For example, more power is available for a longer period of time, and it should also be possible to call up the power independently of the State of Charge – the power stays on even when the charge level is low.

This is made possible by the performance of the battery: the 80 kW continuous and 130 kW peak power mentioned are the specifications of the electric drive system. According to Williams, however, the battery is designed for a peak power of 170 kW and a continuous power of 90 kW. In combination with the “class-leading system cooling”, the power should be optimally available. Conversely, the 360-volt battery is supposed to be able to be charged from zero to 80 per cent in 20 minutes.

When developing the battery, it was not only its performance data that was important, but also its integration into the vehicle. In order to optimally position the battery, drive and charging system in the motorbike chassis, Williams adapted the layout of the battery modules and also integrated the Vehicle Control Unit into the housing of the battery pack. The optimised arrangement of the components in the frame should result in better handling for the rider.

According to Williams, the presentation of the demonstrator marks the end of the joint project funded by the British government through the ‘Innovate UK’ programme. Responsibility in the testing phase that now follows lies with Triumph.

“We look forward to continuing the ambitious and innovative work on the TE-1 demonstrator prototype through the live testing phase and sharing the outcome with Triumph fans across the world,” says Nick Bloor, CEO of Triumph. “Everyone involved at Triumph is proud to have been part of this innovative British collaboration. Personally, I am thrilled with the results we have already achieved with our partners, and the exciting preview of the potential electric future to come.”

Bloor did not announce a specific production model with electric propulsion, however. The TE-1 could be a template for that: The bike shows numerous design elements from Triumph production models, for example in the headlights, the frame, the seat unit and also the single-sided swingarm familiar from the Speed Triple.

It remains to be seen what capacities Williams Advanced Engineering will have for such projects in future: At the end of January, it became known that the Australian mining group Fortescue Metals was taking over the development service provider. Fortescue wants to massively reduce the energy consumption of its fleets and use Williams technologies for goods trains and e-trucks in an ambitious programme.