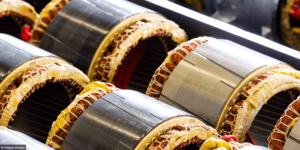 Siemens’ exit from the electric drive joint venture it set up with Valeo in 2016 is now official. Siemens has now reached an agreement with Valeo to divest its 50 per cent stake in the Valeo Siemens eAutomotive (VSeA) joint venture for 277 million euros. VSeA has also received a large order from Renault.

Subject to approval by the relevant authorities, the transaction is expected to close in July 2022, according to Siemens. The positive earnings effect of around 300 million euros will be booked in the second quarter of the current financial year, it said.

The German group’s withdrawal is no surprise, but was already announced in 2018. Since a corresponding exit clause was already stipulated in the joint venture agreement from 2016 with effect from 31 December 2021, the date of early 2022 also seems logical.

At the time of its foundation, Siemens had contributed its business with drive systems for e-vehicles, including e-motors and power electronics, to VSeA. Now the company writes that together with Valeo they have achieved the goal of creating “a supplier recognised as a global leader in the field of electromobility”. This means that now is the right time for Siemens to transfer its stake to Valeo, it says.

“Together with our partner, we successfully positioned the joint venture as a leader in its market space and have now determined an excellent long-term approach,” says Roland Busch, CEO of Siemens AG. “Single ownership and full integration with Valeo provide very strong prospects for the business, its employees and customers. This also marks another important step to sharpen our portfolio as a focused technology company.”

Valeo itself announced that VSeA will be integrated into the Powertrain Systems Business Group from July. Annual synergies, to be fully realised from 2025, are said to be 120 million euros, equivalent to just under two per cent of sales.

Valeo CEO Christophe Périllat thanked Siemens for their joint work over the past years. “The electrification of automotive mobility is accelerating. And so is Valeo,” said Périllat. “This transaction and the integration of Valeo Siemens eAutomotive within our Powertrain Systems Business Group strengthen our position as a major player in electrification by creating a champion equipped with all the associated technologies. It also makes us more innovative, competitive and profitable as we play our part in decarbonizing mobility.”

Shortly after the deal with Siemens, Valeo announced in another statement that Valeo, Valeo Siemens eAutomotive and Groupe Renault would jointly develop and produce a new generation of electric drive systems in France. According to the signed letter of intent, the companies want to develop a particularly efficient drive system that does not require rare earths. Like BMW in its current electric cars, Renault will also rely on current-excited synchronous motors in the future. The 200 kW unit is to be built in series from 2027.

Valeo and VSeA will develop the stator and produce it for Renault. This is to have a higher copper density and thus contribute to better power output. Production will take place at Renault’s Cléon plant in Normandy.

Valeo CEO Christophe Périllat states that the integration will make the company “even more innovative and competitive”. “Valeo is accelerating in electrification, as announced at the presentation of our Move Up plan,” Périllat said. “Thanks to this transaction, Valeo has positioned itself better than ever before as a leader in electric mobility, with a unique advantage in this fast-accelerating market and with a range of technologies that covers absolutely all needs and uses.”

VW to put the ID. Buzz on display at the SXSW