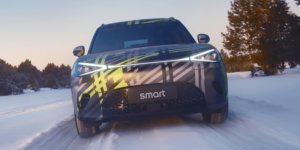 Smart has presented the nomenclature for its new generation of electric cars. It uses the ‘#’ symbol in combination with a number. In view of the Concept #1 presented at the IAA in 2021, the naming is rather unsurprising.

Smart states in the announcement that by using the ‘#’ symbol and combining it with a number, it has defined “a recognizable family name for its new generation of all-electric vehicles”. In addition, the hashtag symbol, which is “often used to indicate the hottest topics in social media”, is intended to remind people of trendsetters in the digital space – and thus also of the brand’s own history, when the first Smart Fortwo set a trend in the automotive industry from the brand’s point of view with its IAA presentation in 1997.

Smart does not give any details on further models in the press release. It is thus open whether the number is simply counted up (and, as with Polestar, merely reflects the chronological order) or whether, as with BMW’s nomenclature, conclusions can also be drawn about the size and positioning of the vehicle via the number.

“As the first product set to launch following the brand’s renewal, the smart #1 perfectly combines electric-drive technology and premium quality,” says Daniel Lescow, Vice President Global Sales, Marketing and After-Sales at Smart Automobile. ” I am convinced that the smart #1 will enthuse future customers in both China and Europe, setting new trends of urban mobility and co-creating powerful brand experiences wherever it will make an appearance.”

According to the announcement, the aerodynamics tests at the China Automotive Engineering Research Institute in Chongqing measured a cW value of 0.29 for the Smart #1. The #1 features an Active Grille Shutter (AGS) air intake and integrated door handles. Both measures are said to have a positive effect on factors such as energy consumption, range, wind noise and stability at high speeds as part of the aerodynamics package.

The winter tests were conducted in northern China. At up to 40 degrees below zero, the driving systems, the tuning of the drive and the battery temperature management system were tested. Customers should be able to set the #1 to automatically preheat the battery via an app or via the control system in the vehicle – for optimal charging and performance efficiency in cold conditions. The integrated door handles just mentioned are also equipped with an “icebreaker function” that “still works even when the vehicle is covered with a thin layer of ice”.