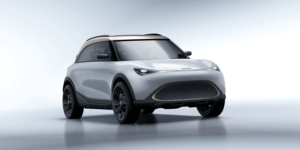 With the Concept #1 at the IAA Mobility in Munich, Smart gives a concrete preview of the first series model of the new all-electric vehicle generation. Instead of a small electric two-seater, there will be an SUV model from Smart in the future.

It is already known that Smart is making a completely new start: At the end of 2019, Mercedes-Benz and the Chinese carmaker Geely founded the joint venture Smart Automobile Co, based in Hangzhou Bay in the coastal city of Ningbo. Mercedes brought in the brand and will design the cars. Geely, on the other hand, provides the technology and takes over production.

In other words, the Concept #1 was designed by Mercedes design chief Gorden Wagener’s team. Smart writes in the press release that the near-production study is “recognisable as a Smart at first glance”, but at the same time “impressively underlines the transformation of the brand”. In other words: the Concept #1 has little in common with the currently known Smart-EQ.

“The new sporty Concept #1 is a redefinition of the smart brand in a very cool grown-up way,” says Gorden Wagener, Chief Design Officer Daimler Group. Daniel Lescow, Vice President Global Sales, Marketing & After-Sales at Smart Automobile, speaks of an “exciting foretaste of what our customers can expect from the smart brand”.

What has basically remained is the short front bonnet (the previous internal combustion Smarts had the engine in the rear) as well as the two-tone paintwork. In the case of the Concept #1, the former is made possible by Geely’s electric platform, which provides for a long wheelbase and short overhangs. The second is solved differently in the Concept #1 than in the previous three Smart generations with their “Tridion” safety cell. On the electric SUV, the roof arch is simply painted in a matt gold, while the rest of the body is white.

In the announcement, Smart does give the exterior dimensions – 4.29 metres long, 1.91 metres wide, 1.70 metres high and 2.75 metres wheelbase – but otherwise gives no further details on the powertrain. As reported, Smart had already confirmed that the SUV will be based on Geely’s SEA platform. However, it is not yet known which powertrains Smart will implement on the basis of this platform.

It is also unclear whether all the features of the Concept #1 will be adopted in series production, despite the fact that it is emphatically close to series production. For example, the concept has doors that open in opposite directions, which looks good on the trade fair stand and allows an open view of the interior – in practice, however, this door concept has not yet proven itself, particularly in tight parking spaces.

The interior with the free-floating centre console and the four individual seats is also more reminiscent of a study than a production car. However, Smart emphasises that a lounge-like atmosphere with a premium feel was definitely the goal in the brand’s new orientation. Thus, “refined details” such as “the ambient light integrated into the vehicle floor or the particularly noble-looking air vents” are also intended to underline the new premium claim.

For the still young target group, there will also be a range of digital functions. The 12.8-inch touchscreen is central to operation. Its user interface is supposed to be particularly user-friendly. An animated avatar can also be seen here, which is intended to support the user as a digital assistant. Thanks to AI, it is supposed to constantly adapt to the preferences of the user. The software runs on a central high-performance computer that is responsible for infotainment, driver assistance systems, electromobility-specific functions and the electric/electronic vehicle architecture (E/E architecture). The main computer and 75 percent of all control units are to be OTA-capable.

Smart is not giving any new details on the market launch of the Concept #1 (or the series version). So far, the statement has been that the E-SUV is to come onto the market in 2022.