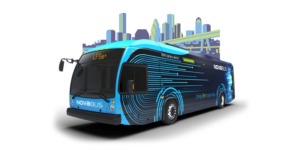 In the last couple of days, two new large orders for electric buses have been made public in the USA. Nova Bus, which is part of the Volvo Group, has received its largest electric bus order to date from Houston in Texas. New Flyer of America, part of the NFI Group, is to deliver 17 vehicles to Denver in Colorado.

The order to Nova Bus was placed by the Houston-based Metropolitan Transit Authority of Harris County (Metro). The board approved the immediate purchase of 20 LFSe+ electric buses. An option for more than 20 additional e-buses was also agreed.

The order is reportedly the first time Metro has purchased electric buses for its total fleet of 1,300 vehicles. The vehicles will be built in Plattsburgh, in the US state of New York. They are expected to enter service in the fourth quarter of 2022 and will initially be used on routes in communities that are more affected by carbon emissions, according to a press release.

The Denver Regional Transportation District ordered Xcelsior Charge NG battery-electric heavy-duty buses from NFI subsidiary New Flyer of America. Denver RTD serves the Denver metropolitan area and operates nearly 33 million bus trips annually on 124 routes. The contract is supported by local and federal funds, it said. Colorado transit fleets are required to convert to 100 per cent zero-emission vehicles by 2050, including at least 1,000 by 2030, according to the Colorado Electric Vehicles Plan.

New Flyer’s battery-electric Xcelsior Charge NG buses have up to a 525 kWh battery and a range of 250 miles (about 400 kilometres) on a single charge. The model was launched in 2021. NFI vehicles are reportedly in use or on order in more than 80 cities in five countries. NFI also operates the Vehicle Innovation Centre, an innovation lab dedicated to advancing bus and coach technology, among other things.

“Through a partnership spanning 25 years, NFI has delivered nearly 500 vehicles to RTD, including 235 New Flyer buses and 249 MCI coaches,” says Chris Stoddart, president of North American Bus and Coach. “Today, we expand sustainable mobility in the greater Denver area with the addition of zero-emission buses for RTD.”