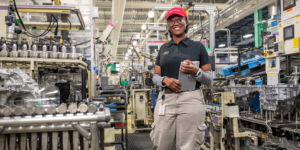 The exact amounts to be invested in the plants are a $73 million investment for Toyota’s West Virginia plant, which will increase hybrid transaxle production capacity to 600,000 units per year. Toyota says they plan to “begin assembling an estimated 120,000 rear motor stators per year, a key component in electric motors” with the additional capital. The Tennessee plant will receive a $17 million investment to increase the plant’s capacity to cast hybrid transaxle cases and housings up to a total of 1.3 million per year.

“Toyota Tennessee is proud to play an important role in our company’s mission to provide customers with safer, reliable, electrified vehicles that advance a carbon-neutral future,” said Wes Woods, president of TMMTN. “Our highly skilled team is excited to expand production of the hybrid transaxle cases and housings.”

The West Virginia plant manager had similar words to share: “Toyota is moving quickly toward an electrified future, and West Virginia will play a critical role in that journey,” said David Rosier, president of TMMWV.

Skoda kicks off series production of the Enyaq Coupé iV