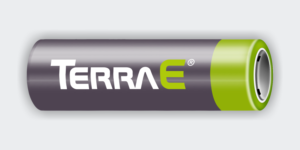 BMZ Group (which stands for Batteries Assembly Centre in German) took over the battery cell consortium TerraE at the end of 2018, and BMZ now wants to offer “lithium-ion cells of the highest quality worldwide” under the TerraE label.

Since the TerraE takeover, the plans have changed a lot. In 2018, it was still said that it wanted to start local cell production in Germany from 2020. This deadline was obviously not met; in 2018, the global pandemic was not yet foreseeable. However, the TerraE cells are now no longer to be produced in Germany at all, but “on existing lines from tier-one suppliers in Asia”. The specifications of these cells would be defined at BMZ by “managing directors, engineers and technicians”.

BMZ says that these are to be round cells in a wide range of common sizes so that the right solution is to be found for every application. The TerraE cells are to have “excellent power density and durability” with a low self-discharge rate.

NMC/NCA cells and LFP cells are to be offered in “almost any size”. The NMC/NCA cells are to be available in the two variants High Energy and High Power. High Energy with its high energy density and service life is said to be suitable for electric cars and energy storage, while High Power with its high charge and discharge rates is more suitable for power tools.

On the TerraE homepage, the four sizes are named as 14500, 18650, 21700 and 26650; the first two digits indicate the diameter of the round cell in millimetres, the three following digits the length. There is also some key data on different versions of the battery in the 18650 and 21700 formats.

In order to support the distribution of the TerraE cells, BMZ has entered into a cooperation with the specialist in battery cell analysis, Batemo, whose tools BMZ has already been using for some time.

In the next step of the cooperation, Batemo will support BMZ in the distribution of its round cells of the global battery brand TerraE: The measurement data, reports and simulation models that Batemo creates and sells are “essential for the work of development departments in battery manufacturing”. The information and simulations provided by Batemo accelerate the development work as
development work, as data is immediately available that would otherwise only be determined in elaborate and lengthy tests by battery manufacturers.

For its part, BMZ will add cell measurement data packages, detailed cell analysis reports and simulation solutions from Batemo to its portfolio.