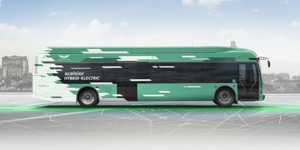 BAE System’s says that its Series-ER (Electric Range) for the New Flyer fleet includes an electric motor, onboard energy storage, and smart controls to create a clean, integrated electric propulsion and accessory power system for the company’s buses. The hybrid system enables zero-emission operation with engine stop and start, which means passengers are not smogged up with emissions when boarding and disembarking from the hybrid buses. The Series-ER also includes geofenced green zone technology. This means that the buses can automatically switch off pollution emissions to electric propulsion in specific zero-emission zones. The onboard charger and advanced energy recovery mean that the Series-ER does not need to plug into the grid, making it a full hybrid electric vehicle (HEV). BAE Systems has not said what ratio of electric driving is provided for what ratio of fossil-fuelled transit.

The hybrid-electric drive Series-ER system features the Modular Accessory Power System (MAPS), a component that uses advanced materials for increased electrical efficiency. BAE Systems says that the system is also designed to be integrated on battery-electric and fuel cell-powered buses. The production and service support for the Series-ER systems will be conducted at the company’s facility in Endicott, N.Y.

BAE Systems says it has 25 years of experience developing and fielding electric propulsion systems and accessories for transit buses. BAE Systems has collaborated on a number of bus projects in the last three years.

In 2019 Alexander Dennis presented a hybrid double-decker bus. The Scottish bus manufacturer Alexander Dennis (ADL), was taken over by North America’s largest bus manufacturer NFI Group which also owns New Flyer, the partner in this new order. The Enviro400ER (ER for “electric range”) was developed in cooperation with BAE Systems. In February the next year,  ADL won a tender to deliver up to 600 green buses to Ireland. The Scottish bus maker Alexander Dennis Limited (ADL) has signed a framework agreement with Ireland’s National Transport Authority (NTA) for the delivery of up to 600 double-decker hybrid buses. NTA expects the first 100 of the diesel-electric buses in Dublin in autumn 2020.

As one of the largest military providers in the world, BAE Systems has developed alternative drive systems for both land vehicles and marine vessels. BAE Systems says it has more than 14,000 propulsion systems in service on transit buses around the globe. The Southeastern Pennsylvania Transportation Authority is one of the largest transit systems in the United States, operating bus, rapid transit, commuter rail, light rail, and electric trolleybus services for nearly 4 million people in five counties in the Greater Philadelphia area and connecting to transit systems in Delaware and New Jersey.