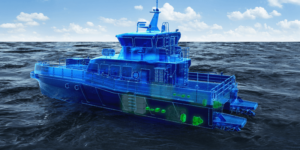 British company BAE Systems has launched HybriGen Power and Propulsion, which is a flexible marine propulsion system that can flexibly be applied with low- or zero-emission variations.

BAE Systems says that its HybriGen Power and Propulsion solutions offer modular accessory power system (MAPS) and modular power control system (MPCS) that allow for a “scalable, tailor-made solution.” The company says that these can be applied to fit the specific power and propulsion requirements of a range of vessels, from sailboats and tugs to passenger ferries.

BAE Systems is very active in the naval and security sector, specialising in naval engineering and warships. Over the last year or so, the maritime sector in many countries – particularly in Europe – has been put under increasing pressure to adhere to CO2 limits. The kind of zero-emission naval technology that has been researched and developed for years for potential security scenarios such as fuel shortages, is now well-timed for logistics and domestic use. BAE Systems has already built considerable experience with fuel cell and battery electric hybrid systems for buses and boats but also a few aircraft applications.

BAE Systems say that their low and zero-emission systems are ideal for research and survey vessels, as well as passenger and car ferries. One might also presume that there are potentially many other domestic and logistics marine scenarios where such low- and zero-emission propulsion systems will be useful.

Unfortunately, the company does not give a lot of information about its fuel cell systems. These solutions are enjoying increased attention for the hard-to-decarbonise sectors like the maritime sector, and most urgently for longer shipping routes where bunker fuel is used, where a number of fuel cell solutions are still in development. The naval specialist offers zero-emission purely battery electric solutions but does not give further information about the size or chemical composition of the batteries.

With the diesel-electric hybrid variants, SAE says that the diesel engine can be turned off with the option of geofencing technology that can be applied to HybriGen power and propulsion system. This enables operation in zero-emission zones so that the vessel can operate in fully electric mode when entering ports, marinas, and other heavily-trafficked areas. The company says: “Our modular, scalable system combines electric generators, with a range of energy storage options for one compact, unified system.” Here, a variable speed generator set and lithium-ion battery storage provide efficient system operation to reduce underloading of the diesel engine to save fuel and maintenance.

BAE Systems is very much a trans-Atlantic company. The British company says that work on the HybriGen Power and Propulsion System will be conducted at the company’s facility in Endicott, New York, where SAE Systems also produces its hydrogen fuel cell technology.