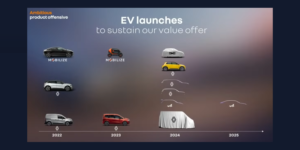 Dacia will launch a new electric subcompact car that will replace the brand’s Dacia Spring in 2024. Whereby the Dacia Spring was only launched in 2021.

The announcement was made at the Renault Group’s annual press conference. It is already quite clear that the Renault-Nissan-Mitsubishi alliance – and thus also the budget brand Dacia, which belongs to Renault – is accelerating its electric projects. But for Dacia in particular, the plans have been a challenge to keep the brand in its usual price segment.

Renault boss Luca de Meo has given an outlook on the concrete electric vehicle models for the years 2022 to 2025. In 2024, not only the electric Renault 4 and 5 including the sporty Alpine offshoot are to be launched, but also a Renault van and a Dacia subcompact. The published overview does not reveal many details. The vehicle is covered with a tarpaulin on which the new Dacia logo can be seen. What is clearly visible is that the upcoming electric Dacia is a good deal shorter than the Renault 4.

De Meo did not give a name for the Dacia yet, referring to it only as the “successor to the Spring”. According to the Renault boss, the vehicle will be based on the CMF-A platform, which is exactly the platform on which the Renault Kwid, Renault City-K-ZE and the Dacia Spring are already based. Various media reports indicate that de Meo probably meant the CMF-AEV – the all-electric successor platform to the CMF-A. The new R4 (and also the successor to the Nissan Micra) will be based on the so-called CMF-BEV, an electric platform for the B-segment.

De Meo did not comment on possible performance data and prices of the e-Dacia. The Dacia Spring is 3.73 metres long and currently costs at least 20,490 euros in Germany before deduction of the environmental bonus or less than 12,000 euros after subsidies. Technically, the Spring is the Renault City K-ZE offered by the carmaker in China. For Europe, the vehicle has been added to the Dacia brand and the look has been slightly adapted.

De Meo did not give any details on why the Spring is being cancelled without replacement after only three years. The Renault boss only said that the decision had been taken “this year”. Obviously, the focus is on costs and technology – the EuroNCAP crash test with only one out of five possible stars was devastating, plus sharply increased transport costs may have eaten into the already tight margin for small cars. While there were many orders for the Spring in Europe, there were also numerous reports of quality shortcomings.

It is not yet clear where the upcoming electric Dacia based on the CMF AEV will be built. German publication Auto, Motor und Sport speculates that Renault would “hope for big leaps in quality and safety” from the platform change. At what price a somewhat higher-quality and safer electric small car could be offered is still an open question.