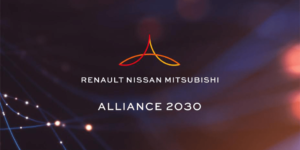 The Renault-Nissan-Mitsubishi alliance has unveiled a joint electromobility roadmap until 2030, which envisages investments of a further 23 billion euros over the next five years. The roadmap thus goes beyond what had been leaked in advance.

On Monday, the news agency Reuters reported with reference to insiders that the alliance would invest an additional 20 billion euros. With the 23 billion euros actually decided, the total investment in electromobility will rise to 33 billion euros by 2027. In addition, Reuters was still talking about 30 new electric models by 2030. According to Renault’s announcement, however, there will be 35 new electric vehicle models, based on five electric car platforms.

A central pillar of the joint electric strategy is also the alliance’s new joint battery strategy. This includes, among other things, the selection of a joint battery supplier for Renault and Nissan in the core markets. The goal is to reduce battery costs by 50 per cent by 2026 and 65 per cent by 2028. This will give the alliance a total battery production capacity of 220 GWh for electric vehicles at key production sites worldwide by 2030.

For Europe, the decision was already made last year: Both Nissan in Sunderland and Renault for the planned battery cell factory in Douai are working with Envision AESC. To note, Nissan had sold its own battery subsidiary and battery production in Sunderland to Envision Group in 2018.

Solid-state battery in the second half of decade

In addition, there is a focus on the development of a common solid-state battery technology. Nissan will lead the innovations in this area, which will benefit all members of the alliance. The Japanese had already announced in November 2021 that they would sell electric cars with specially developed solid-state batteries in the second half of the decade. These efforts will now be extended to the Alliance level.

Concrete key points for the planned solid-state batteries are also mentioned: The aim is to achieve twice the energy density of current liquid lithium-ion batteries. The charging time is to be reduced to one third. The new battery technology is to be mass-produced by mid-2028 and cost parity with internal combustion vehicles is to be achieved by further reducing costs to $65 per kWh.

In the announcement, Renault details the five vehicle platforms: The CMF-AEV for the Dacia Spring, the KEI-EV for electric kei cars in Japan, the LCV-EV for the Renault Kangoo and Nissan Townstar, the aforementioned CMF-EV and the CMF-BEV. The Renault 5 and the upcoming Nissan Micra will be based on the latter – here the Reuters insiders were right. Meanwhile, Nissan has also confirmed the Micra successor in a statement of its own. “This is a great example of the Alliance”s ‘smart differentiation” approach,” said Nissan’s COO Ashwani Gupta. “Succeeding our iconic Micra, I am sure this new model will provide further excitement to our customers in Europe.” Nissan plans to announce details of the model and its naming at a later date – so it’s not yet a foregone conclusion that the Micra name will be retained.

However, Renault gives more details about the Micra in the memo: Nissan designed the car, but it was developed by Renault – the leader-follower principle. The Micra will also be built in parallel with the Renault 5 in the eMobility cluster ElectriCity.

In Europe, Mitsubishi, which has recently been squeezed into Asia and Oceania, will launch new models after all. These will be based on Renault models. Such projects have been hinted at with the Leader-Follower principle established in 2020. The newly declared goal: by 2026, 80 per cent of the models are to be based on common platforms. Currently, the figure is 60 per cent.

Under Renault’s leadership, the Alliance is also developing a common centralised electrical and electronic architecture, bringing together electronics hardware and software applications. By 2025, the Alliance aims to bring its first fully software-defined vehicle to market. With this vehicle, the Alliance aims to improve the over-the-air performance of its vehicles throughout their lifecycle.

“Among the world’s automotive leaders, the Renault-Nissan-Mitsubishi Alliance is a proven, unique model. For 22 years, we have been building on our respective cultures and strengths for our common benefit,” says Jean-Dominique Senard, Chairman of the Alliance. “Today the Alliance is accelerating to lead the mobility revolution and deliver more value to customers, our people, our shareholders and all our stakeholders.”

Tesla takes stock of 2021 as a “breakthrough year”