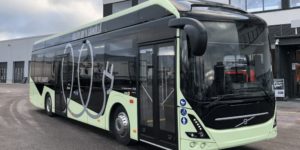 Volvo Buses has received three orders from Finland for a total of 82 electric buses. Of these, 61 are destined for the capital Helsinki and represent the largest single order for Volvo Buses in Finland to date.

Volvo says that while all 82 vehicles on order are low-floor buses, the operators have opted for different lengths. In Helsinki, for example, they have ordered Volvo 7900 Electric Articulated 18-metre-long articulated buses. The articulated buses have pantographs and are loaded at the terminal stops via pantographs.

Numerous electric buses are already on the road in the Finnish capital; the operator Nobina has ordered these vehicles in several tranches from the Chinese manufacturer BYD.

“We fully support the city of Savonlinna as it takes its first steps towards electrifying its public transport,” says Petteri Reku, Volvo Buses, Country Manager, Finland. “As more and more cities around the world aim to become Zero Cities, these orders show that Volvo Buses is in a strong position to support the same transformation in Finland,” Reku pointed out.

Volvo has offered the current version of the 7900 Electric since 2017. The articulated bus version that carries 150 passengers was introduced in 2019.

Finland is particularly active in electric mobility, not only in decarbonising its public transport, micromobility and cars, but also in terms of battery production and recycling.

Atlis Motors to supply US military