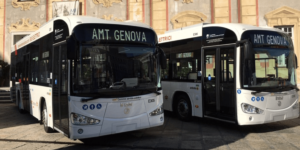 In Italy, 350 electric buses are to be purchased for Milan. The Milan City Council has passed a resolution clearing the way for the release of 249 million euros for the fleet renewal programme of the local public transport company ATM.

The funds will enable ATM to purchase a total of 350 new zero-emission buses for public transport, including the required infrastructure by June 2026.

This will bring the number of ATM’s electric buses to 510 by 2026. By 2030, all of ATM’s buses in Milan are to be electric. In the past, ATM has mainly relied on vehicles from the Polish manufacturer Solaris, including battery-electric buses and also trolleybuses with overhead contact lines.

It is not entirely clear if exclusively battery-electric or also hydrogen fuel cell buses can be purchased. At the beginning of the City’s announcement, there is talk of “350 new zero-emission buses, powered by electricity or hydrogen” being purchased by June 2026 which will include the “relevant infrastructure.” Only one paragraph later, however, only charging infrastructure is mentioned, no hydrogen refuelling stations or generation facilities.

The current funding covers the needs until 2026, after which another multi-million funding for ATM will be needed: according to the city’s plans, the entire ATM fleet of 1,200 vehicles should be completely converted by 2030. However, the current planning only includes the 510 electric buses mentioned.

Arianna Censi, Councillor for Mobility explains: “The City of Milan, together with Atm, is aiming to become the city with zero-emission public transport in less than a decade. A fleet of all-electric buses will continue to guarantee efficient service and zero emissions. The green future of our city requires commitment from the Administration to achieve important goals. And the renewal of ATM’s fleet is one of them”.