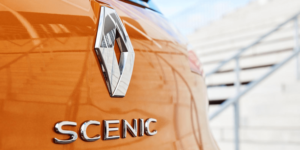 Renault wants to revive its Scénic compact van with an electric drive. The Scénic E-Tech Electric will be a five-seat electric SUV.

This British magazine Auto Express made reference to statements by Renault boss Luca de Meo, saying that the Scénic E-Tech Electric will be based on the CMF-EV platform from the Renault-Nissan-Mitsubishi alliance, which debuts in the Renault Mégane E-Tech Electric.

While the electric Mégane is expected to compete against models such as the VW ID.3 as a classic compact car, the Scénic would become the counterpart to the ID.4 and other electric SUVs in the 4.60- to 4.75-metre range.

A preview of the Scénic E-Tech Electric is due in May of this year, and the model is expected to go on sale in 2024. During the annual press conference for 2021, a still-veiled electric Dacia attracted attention in the overview of planned electric vehicle models. The planned electric SUV is likely to be the silhouette shown under the new Renault R4.

When specifically asked by Auto Express, de Meo ruled out a Scénic comeback with a van body: “No. We will not do another MPV (multi-purpose vehicle, ed.),” the Renault boss said. “We will make a more progressive model than that. The Scénic needs to have space and range that will go beyond that of the upcoming Mégane.”

Within Allianz, the Nissan Ariya could offer a clue: While the CMF-EV-based Mégane E-Tech Electic offers a maximum of 60 kWh batteries, the Japanese partner’s electric SUV is said to offer up to 87 kWh and strong all-wheel drive.

Renault had first offered the Scénic as a compact van in 1996, at that time still as a Mégane offshoot called Mégane Scénic. It was not until the introduction of the second generation in 2003 that the van became an independent model. Currently, the fourth generation of the van is sold as a five- and seven-seater (then as the Grand Scénic) but has found it increasingly difficult to compete against rising SUV sales over the years. The model is still available in Germany, but Renault stopped selling it in the UK at the end of 2021.

It wouldn’t be the first time Renault has used a well-known model name for another model. The Espace was a wide-body van from 1984 to 2014. However, the fifth generation offered since 2015 with this model name is no longer a large van due to declining demand in this segment, but a crossover that is much closer to an SUV than the fourth generation with the van concept.

At the end of January, the Renault-Nissan-Mitsubishi alliance had presented a joint eMobility roadmap until 2030, which envisages 35 new electric vehicle models.

Final approval for Giga Berlin rumoured to follow this week