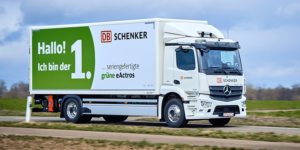 Daimler Truck has handed over the first eActros to German logistics companies around five months after Daimler started series production in Germany’s carmaking region of southwestern Germany. DB Schenker will use the eActros 300 to transport palletised consignments in the Leipzig area, while the  Dachser has also taken delivery of another unit.

The eActros is not new to DB Schenker since the logistics service provider has already used the electric truck in the prototype stage as part of Daimler Truck’s “innovation fleet”. Since then, some technical data have changed for the production model, which has been in production since October 2021.

The eActros 300 is the version that comes with three battery packs. A fourth battery pack is also offered as an option, in which case the model is called the eActros 400. One package has an energy content of 112 kWh, of which around 97 kWh can be used. Each module represents a range of around 100 kilometres. The charging power is up to 160 kW. Daimler Truck says that the eActros 300 can thus be charged from 20 to 80 per cent in just over an hour.

The eActros 300 for DB Schenker has an aerodynamic box body from Spier called the ‘Athlet dry freight box body in aeroform design’. The two-axle truck with a permissible gross weight of 19 tonnes rolled off the production line on schedule last year and was now officially handed over at a customer meeting in Wörth after the funding was approved.

Karin Rådström, Member of the Board of Management Daimler Truck Holding AG, responsible for the regions Europe and Latin America and the Mercedes-Benz Truck brand: “We are very proud that an innovative logistics provider like Dachser has opted for the eActros and is showing confidence in us through an order of several vehicles including our comprehensive service. Dachser has been an important partner during the development of the eActros from prototype to series vehicle, and we look forward to continuing our strong partnership with Dachser on the road to zero-emission transport.”

Upon the arrival of the zero-emission truck from Daimler, DB Schenker reiterated its goal of becoming the world’s leading provider of green logistics. “The lightweight Fuso eCanter from Daimler Truck has already proven its suitability for everyday use in our company in various cities. Now we are eager to see how the eActros will perform,” says Wolfgang Janda, Executive Vice President, Head of Network & Line Haul Management at DB Schenker.

DB Schenker is not only relying on Daimler Truck. In November 2021 the company announced that it had ordered around 1,500 Zeros from Volta Trucks.

Another Mercedes-Benz eActros 300 from series production is going to Dachser. It will replace the prototype in Stuttgart that Dachser has already been testing in practice since 2019. Dachser plans to add more eActros to its fleet as part of its climate protection strategy.

The eActros for Dachser also has the Spier box body. “The eActros has proven its everyday value in Stuttgart, especially when it comes to the emission-free delivery of palletized goods to customers”,” says Stefan Hohm, Chief Development Officer (CDO) and member of the Dachser Management Board. “We also see some potential in shuttle traffic for the all-electric truck. We assume that the vehicle will find a wide range of applications in sustainable cargo logistics.”

Dachser has planned two fields of application for its eActros 300, the first of which is to deliver general cargo, i.e. palletised consignments that are too large and heavy for parcel delivery, in Stuttgart city centre. In addition, the vehicle (in combination with a Fuso eCanter) will supply an inner-city microhub with consignments. These will then be delivered with electric cargo bikes.