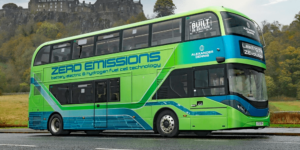 The Scottish Government has awarded over £62 million in the first phase of its Zero Emission Bus Challenge Fund (ScotZEB) to replace 276 old diesel buses with new electric buses and the necessary charging infrastructure. 137 of these electric buses will be built by ADL in Falkirk.

The sum of 62 million pounds is the equivalent of 74.2 million euros. This is “the largest investment made in Scotland to decarbonize buses” and supports the government’s “Mission Zero” ambitions for the transport sector, according to the statement.

“We want more people to choose to travel by bus now and in the future, knowing that local buses contribute to our climate change ambitions,” said Transport Minister Jenny Gilruth. “Our Zero Emission Bus Challenge Fund is decarbonizing Scotland’s bus fleet faster than ever before.”

In addition, the government’s announcement features a number of public transport operators who state that they were only able to afford to purchase the e-buses thanks to the ‘ScotEZB’ funding. “As a smaller local operator, it’s been difficult for us to compete with larger operators and attract in financial support to help make the switch,” says William Houston, owner of Houston’s Coaches in Lockerbie, for example. “The ScotZEB programme has helped us compete and enabled Houston’s to invest in new zero emission buses.”

Unsurprisingly, manufacturer Alexander Dennis Limited also welcomes the funding. ADL builds its BYD-powered electric buses in Falkirk, Scotland, which is located between Glasgow and Edinburgh. At 137 vehicles, quite exactly half of the funded e-buses come from ADL.

“These zero emission buses will be built at our factory in Falkirk and therefore ensure this Scottish Government investment is made domestically, allowing the benefits to be felt by our team members and across our communities,” said Paul Davies, president and chief executive officer of ADL. “We very much look forward to working with the successful operators to finalise terms and get our teams working on these buses.”