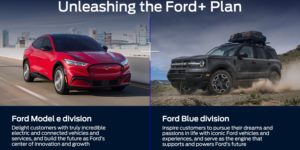 The US carmaker Ford has announced that it will divide its automotive business into two separate companies. Electric vehicles will in future be developed and built by ‘Ford Model e’, the combustion cars by ‘Ford Blue’.

So now after all: Ford is splitting up its car business, although the company had denied the move until last. “We have no plans to spin off our battery electric vehicle business or our traditional combustion engine business,” Ford CEO Jim Farley had said as recently as mid-February.

As the carmaker now confirms as part of its revised ‘Ford+’ plan, there will be two divisions in future. “We are going all in, creating separate but complementary businesses that give us start-up speed and unbridled innovation in Ford Model e together with Ford Blue’s industrial know-how, volume and iconic brands like Bronco, that start-ups can only dream about,” Farley is now quoted as saying.

Ford says it will create two companies “poised to compete and win against both new EV competitors and established automakers.” It will do so by “accelerating innovation and delivery of breakthrough electric vehicles at scale, and develop software and connected vehicle technologies and services for all of Ford”. Targets include ‘Ford Model e’ producing more than two million electric vehicles annually from 2026.

Although ‘Ford Blue’ and ‘Ford Model e’ will operate as separate companies in the market, they will share “relevant technologies and best practices”.

Ford justifies the decision to restructure by recognising “that different approaches, talents and, ultimately, organisations are required to unleash Ford’s development and delivery of electric and digitally connected vehicles and services and fully capitalise on the company’s iconic family of internal combustion vehicles”.

The ‘E’ division, according to Farley, is to be “Ford’s centre for innovation and growth, a team of the world’s best software, electrical and automotive talent unleashed to create truly incredible electric vehicles and digital experiences for new generations of Ford customers”. To do this, he said, Ford Model e should attract and retain the best software, engineering, design and UX talent – something Ford seems to have lost its confidence to do with its internal combustion business.

In addition, the division is to develop key technologies for electric vehicles, such as platforms, batteries, electric drive systems, inverters, charging systems and recycling. And networked software and vehicle architectures.

Ford Model e will be headed by CEO Farley. His management team will include Lisa Drake as Vice President for EV Industrialisation, but also ex-Tesla engineer Doug Field as Chief EV and Digital Systems Officer – in other words, as head of product development. “Designing truly incredible electric and software-driven vehicles – with experiences customers can’t even imagine yet – requires a clean-sheet approach,” Field says. “We are creating an organization that benefits from all of Ford’s know-how and capabilities, but that can move with speed and unconstrained ambition to create revolutionary new products.”

Marin Gjaja will be Model e’s Chief Customer Officer, leading the division’s go-to-market, customer experience and new business initiatives. Darren Palmer will be vice president of electric vehicle programmes. Not part of the Ford Model e leadership team is Ted Cannis, who has long been Director Global Electrification: Cannis is CEO of the Ford Pro software service, which the automaker hopes will generate revenue from its software business.

In the course of the reorganisation, Ford’s former European boss, Stuart Rowley, is now given a global task. As Chief Transformation and Quality Officer, he will “establish quality as a reason to choose a Ford and lead Ford’s drive to improved efficiency, reduced complexity and a lean, fully competitive cost structure across the enterprise”.