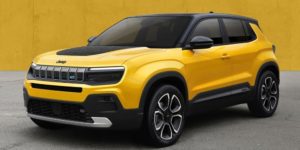 This represents a significant tightening of the previous electrification plan: In its strategy published last year, Stellantis was saying that by the end of this decade it wanted to achieve 70 per cent of its sales in Europe and 40 per cent in the USA with “low emission vehicles”. Here, the company was still keeping the back door open for other types of drive. But now, Stellantis CEO Carlos Tavares is speaking exclusively about battery-electric vehicles.

“We plan to have more than 75 BEVs on the market by 2030 and to achieve annual global BEV sales of five million vehicles,” said Tavares. In the US alone, 25 all-new BEVs are to be introduced, including the first all-electric Jeep – more on this model in a moment.

In the commercial vehicle sector, Stellantis plans electric offerings in all segments, including pickup trucks. As a preview, Tavares pointed here to the BEV version of the Ram 1500 announced for 2024, so more pickups will follow. Details on this have not yet been revealed.

Stellantis also hopes the electrification strategy will significantly improve business: “We will double our Net Revenues by 2030 and sustain double-digit Adjusted Operating Income margins throughout the decade,” says Tavares. Until recently, the Portuguese-born Tavares had described electrification as politically desired and criticised that it would make mobility too expensive for many people. Now he is talking about offering the “latest technologies” not only in high-performance and luxury vehicles but also in the “most affordable models”, although it is not yet clear at what prices these will be offered.

In the course of the electric vehicle offensive, the group wants to increase its battery production capacities by 140 GWh to about 400 GWh by 2030, up from the 260 gigawatt-hours previously envisaged. So far, about two battery factories of the ACC joint venture are planned – but in the meantime, Mercedes-Benz has also bought into this joint venture with Total and will purchase some of the battery cells produced there.

In addition, Stellantis announced an expansion of the use of hydrogen fuel cell technology to large vans in 2024 and, further down the line, to trucks. Here too, however, there are no details yet.

The phase-out of the combustion engine was already foreseeable, at least in Europe. For numerous Stellantis brands, dates are already known from which only electric cars are to be sold – for Opel, Alfa Romeo or DS, for example. At the end of February 2022, the year 2027 was also mentioned for the transformation at Fiat. At the ‘EV Day 2021’ it was still said that Fiat would become a purely electric brand between 2025 and 2030, as soon as electric cars were cheaper than comparable combustion engines.

On the sidelines of the strategy presentation, the Jeep brand published pictures of its first battery-electric SUV. A name and technical specifications have not yet been revealed. However, the market launch is scheduled for the first half of 2023. The vehicle looks compact and features numerous Jeep-typical design elements – such as the X-shaped light graphic of the rear lights, the flared wheel arches and, of course, the seven-part radiator grille at the front, which is, however, closed on the BEV. A blue ‘e’ is clearly visible in the second element of the grille on the driver’s side.

Various media reports have said that the model will be based on the modified CMP2 platform (or its electrified derivative e-CMP) and will be built at the Tichy plant in Poland. This means that a relationship to models such as the Peugeot e-2008 (50 kWh battery, 100 kW drive) is very likely. The new electric ‘STLA Small’ platform is not to be rolled out until 2026.